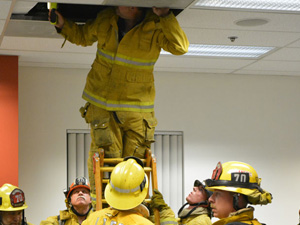 Firefighters and campus police responded to a student’s 911 call about smoke in a classroom in Juniper Hall Monday night.

“There was a smell of something burning and a high chance of fire,” Malikov said.

Firefighters were opening the ceiling panels to look for the source of the smoke.

Students didn’t even go inside the classroom according to junior systems and management major Masis Geragosian.

CSUN PD Corporal Tom Finnerty said that all electricity was shut down to the room as a precaution and that the problem may have been related to a part within the air conditioning system.

“It could possibly be the air conditioning belt,” Finnerty said, adding that the part can wear out.

“Five to seven minutes before class, I saw them (students) outside. I didn’t know about it at all. I walked in ready to go,” said Behnam Abrams, the class’ professor.