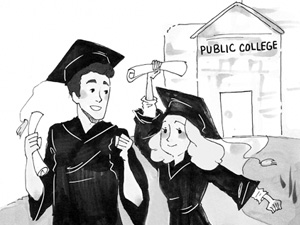 California’s community colleges are considering a proposal which would allow them to grant bachelor’s degrees to students in order to boost graduation rates and the number of trained professionals in the workforce.

A 16-member panel, comprised of administrators, trustees, students and faculty appointed by community colleges Chancellor Brice Harris will conduct research and report a recommendation to Harris and the Board of Governors by the end of this year. The panel includes a member from both the UC and CSU systems.

Supporters of the plan claim it would help the workforce by adding trained professionals to it and providing added convenience for students in less urban areas that don’t have easy access to four-year universities.

However, critics believe it may diminish the value of a bachelor’s degree.

“It’s going to help high school students not take their education seriously and strive lower because they can go to a community colleges and get a degree,” said Samuel Camarena, a sophomore business major. “It’s going to lower the value of a bachelor’s.”

Michael Morvice, president of the California Community College Student Affairs Association, said that though his organization hasn’t taken a stance on whether or not junior colleges should be able to hand out four-year degrees, he believes it can be beneficial.

“It is meant to supplement programs that might not exist as much, such as nursing,” Morvice said. “They are meant to bolster unique programs that may not be offered as much. However, it is important that the state looks into the redundancy of the bachelor’s degrees, meaning they shouldn’t offer similar degrees at community colleges next to each other. They should spread the love, if you will.”

Some students support the proposal due to the financial relief it can provide compared to obtaining a degree at a four-year college.

“I totally agree because of the convenience factor and the economic factor. It’s closer to wherever you are, and state schools charge so much more,” said Nick Shelton, a junior CTVA major. “Although in my experience the teachers here are more knowledgeable than in community college, so it’s a trade off.”

Harris’ office released the following statement on the subject: “The establishment of bachelor degree programs at community colleges is seen by some as a strategy to increase college participation rates for local residents who are unable to relocate because of family or work commitments or to address the needs of rural communities and the state’s need for additional bachelor-degree trained individuals in high demand disciplines.”

Making California the 22nd state to allow junior colleges to grant bachelor’s degrees may stray from the state’s Master Plan for Higher Education, which was adopted in 1960. The UC system has concerns about this deviation.

The Master Plan created a framework for California’s higher education system and split it into three sections: community colleges, the UC system and the state system (now the CSU). It designated community colleges for transfer students and students interested in vocational and/or career training while four-year universities were designed for heavy research and higher level degrees. It’s also stated that community colleges may not restrict enrollment by denying access to eligible citizens.

“It would be a major departure from the Master Plan, which differentiates between the school systems and what degrees each can give,” said Dianne Klein, spokeswoman for UC. “We support the Master Plan, and we’re glad to be given the opportunity to discuss this issue with the community colleges in their panel.”

However, the Master Plan has proven flexible in the past, as some 600,000 students have been turned away from community colleges due to budget cuts between 2007 and 2011. Also, in recent years, the CSU system started offering doctoral degrees, something that was exclusively reserved for the UC system.

For example, College of the Canyons, a junior college in Valencia, partnered with California State University, Los Angeles to offer bachelor’s degrees through its extended education program.

Though some of its universities currently partner with CoC and other junior colleges to offer degrees, the CSU has not officially taken a stance on the issue and said they won’t until the panel releases the results of their research.