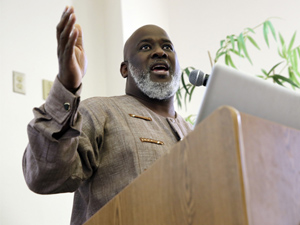 Akinyele Umoja, also a political science professor at Los Angeles Southwest College, stood in the front of the Thousand Oaks room in the USU to speak about the black power movement and the civil rights movement.

“Pan African Studies started at Cal State University, Northridge by student protest in 1968 to help bring in other perspectives,” Umoja said. “It was important because the movement in that time helped democratize the university. This is why there are black studies and chicano studies, which brought other perspectives to campuses.”

Non-violent strategies included boycotts and sit-ins. Umoja discussed how institutional discrimination evolved for the better due to the many protests for better educational opportunities and to mobilize towards a better future.

Janelle Whittaker, 22, kinesiology major and president of the NAACP at CSUN said what caught her attention during the lecture was how politically involved students were back then through sit-ins and other non-violent protests to get their voice heard.

“Often times we think that as students we don’t have any avenues to change what we are going through and this (lecture) gave (me) an idea on how to improve towards social change,” Whittaker said.