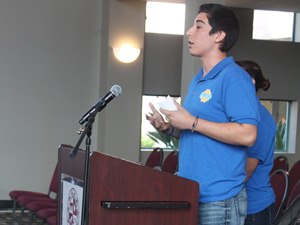 A representative from the CSU Health Education program attended this week’s Associated Students meeting to further educate the senate on new healthcare laws that will take effect at the start of 2014.

Valerie Ojeda, the representative, went over the two options for healthcare that will now be available for students as well as other individual beneficiaries. These two options include both Medi-Cal and newcomer Covered California.

Some requirements have changed, allowing individuals who have an income of less than $15,000 or a family of four with an income lower than $31,000 to now receive Medi-Cal services.

“You no longer need children to be eligible for this program,” Ojeda said.

She also mentioned some myths and misconceptions that are associated with the new healthcare laws. One in particular is that students don’t need to worry about more fees for health insurance if they are already paying their student fees for the Klotz Student Health Center.

Ojeda reiterated that even though students may get some coverage from the health center on campus, it certainly doesn’t cover every single health care need a student may have. She stressed the fact that in the event of an emergency, students can’t always count on the health center, as it is not even open every day.

“After hour emergency care services are not provided (at the Klotz Health Center),” Ojeda said.

Students can get more information on their own by visiting the CSU Health Insurance Education Project website.

“It’s important to know and educate our students on making the decision of choosing the right health insurance,” Ojeda said.

Senator Sarah Garcia was pleased with Ojeda’s presentation and took the time to thank her for coming into the meeting.

“Thank you for coming I think it’s definitely something that we need more information on, I mean there are signs all over campus but it’s nice to get further educated on it,” Garcia said.

During open forum, peer educators from University Counseling Services’ Blues Project requested additional funding for their annual Beat the Blues Week. This is an event held on campus that is meant to educate and spread awareness about the severity of depression and suicide.

Devin Serpas, one of the peer educators and treasure of the Blues Project, said the money is for a banner that would hang from the Oviatt Library.

“Last year our event was a huge success and this year we want to make it 10 times better than it was, but we would need to promote it better, ” Serpas said..