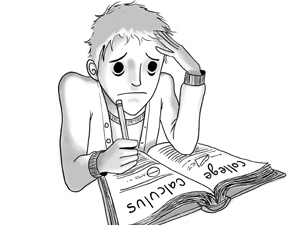 Abigail Ramos, 24, a senior studying business at CSUN managed to enter college as prepared as she could be despite obstacles she faced along the road, especially when it came time to take the SAT test.

“I came from a little city neighboring Watts,” Ramos said. “We barely had enough books, even less tutoring for the SAT. I did what I could with the hand I was dealt and I managed to keep my grades high enough to be accepted here. It would have been great to attend a few workshops for it, but that just wasn’t the case for my high school.”

A new report on College and Career Readiness by the College Board shows that only 43 percent of SAT takers in the class of 2013 graduated from high school were academically prepared for rigorous college-level course work, a number that has remained the same for the last five years.

The report also shows that low-income students and minorities are disadvantaged by the SAT due to lack of resources.

“We must dramatically increase the number of students in K-12 who are prepared for college and careers,” said College Board President David Coleman. “Only by transforming the daily work that students do can we achieve excellence and equity.”

The SAT College and Career Readiness Benchmark was developed by the College Board in an attempt to aid secondary school administrators, educators and policymakers assess the effectiveness of academic programs to better prepare students for college.

“The College Board will do everything it can to make sure students have access to opportunity, including rigorous course work,” said Coleman.

These students are also more likely to have completed a core curriculum, taken honor or AP courses, and be ranked in the top 10 percent of their high school graduating class according to their GPA.

But Director of Academic First Year Experiences at CSUN, Cheryl Spector, believes that there is a problem in using the SAT as a predictor of success as well as high school grades because you are focusing on the student at age 16 or 17, a very malleable time.

“You’re always looking back at who were the students at the time they took the test and you’re not allowing for the possibility that students are going to change and become different in college,” Spector said. “I think most students do change some, and my aim is to change as many as possible for the better.

Spector explained that we cannot expect students to be fully prepared after high school because “college is the place that’s supposed to make you ready for college.”

“You can’t tell who’s going to rise to the occasion and be able to make it and suddenly grow into it,” Spector said. “If you lock people out based on SAT scores, you just don’t give enough chances to enough people for the opportunity of an education.”

The College Board’s report showed that test takers in the low-income category, from families that make less than $20,000 per year, averaged a score of 1326 which is far below the benchmark, as opposed to students averaging a score of 1619 from families who make more than $100,000.

Many critics of standardized testing argue that the exams are unfair to students from low-income backgrounds because these students don’t have equal access to advanced classes or test preparation materials.

“The SAT today is so heavily influenced by how much parents are able to pay for students (so) they are a reflection of their socioeconomic status,” said former Assistant Secretary of Education Diane Ravitch.

Ravitch, who recently visited CSUN to discuss education, said colleges and universities should spend more time evaluating the applicants in terms of their high school work, recommendations from teachers, student essays and other measures.

“I came from Granada Hills high and I went to a lot of SAT workshops but I decided that a big UC campus just wasn’t for me,” said Michael Sanchez, 20, junior chemistry major. “Now my younger brother is preparing for the SAT and he has aspirations to attend a private school. In that case, I see how the SAT can be important. But I don’t see how he would be able to do that if he didn’t have the resources he has.”

California Gov. Jerry Brown recently signed legislation which will replace current public school standardized tests. This new law will pay for school districts to shift to computerized tests and will be based on the Common Core standards.

However, Ravitch said she cannot support the Common Core standards because she believes these concepts should be tested before being forced on teachers and students. She believes that there are many ways to teach and many ways to learn. The test scores will not be able to be assessed for five or 10 years and Ravitch believes this is far too long because changes need to be made now.

In an attempt to give all students an equal opportunity to succeed, the College Board is now using evidence-based practices to help these students succeed.

The organization is trying to aid students by giving them access to rigorous course work by working with its partners to expand access to AP courses to all students, providing customized college information to high-achieving low-income students, offering SAT fee waivers and hosting an SAT School Day where students will be able to take the SAT exam for free in their own school.

“You’ll find that as you look across different schools within the LAUSD, there is quite a bit of differences in terms of access to resources and access to learning opportunity,” said professor and Director of Doctoral Programs Miguel Ceja. “I think there is probably a disconnect with what’s being taught at high school and what’s expected in college (and) depending on who’s defining that, there’s going to be a gap between what colleges expect from students and what K-12 is doing to prepare students.”

Ceja said that high schools are a reflection of their communities, so if the city has no resources, students will be at a disadvantage. He believes that if we change our way of thinking, students can be successful with the right resources and opportunities, but they also need the motivation to do so.

“Everyone has to buy into this idea that all students can succeed and that as a school, we can promote a very healthy and strong college-going culture or at least, a healthy, strong successful culture whether someone wants to go to college or not,” Ceja said.