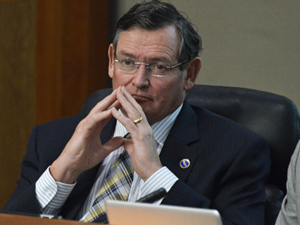 During the CSU Board of Trustees (BOT) meeting Tuesday a heated debate ensued regarding the allocation of funds for the 2014-2015 fiscal year.

Committee of Finance speaker Robert Turnage, assistant vice chancellor for the budget, presented a recommended support budget request for the 2014-2015 fiscal year to the board for the second time this semester. During the last BOT meeting Gov. Jerry Brown had a few concerns regarding the tentative budget and it was sent back for amendments.

The money requested in this budget will be used for the increased enrollment demand within the CSU system, priority maintenance needs, infrastructure repair and a small percent compensation increase for faculty and staff who have yet to receive a pay increase in the past couple of years.

Turnage, with the help of his colleagues, amended the original budget request of $250 million from the last BOT meeting and requested a total of $237.6 million for the next fiscal year. The proposed support budget was a collective effort and was supported by student and faculty members of the academic senate as well as multiple presidents of the CSUs.

“I think everyone made a serious effort to make a balance (deciding) what our needs are,” Turnage said. “We have focused this budget on the objective of student access… (and hope) we can provide safe and functional facilities for students, faculty and staff.”

In terms of enrollment, Turnage requested that the board support the budget by providing $7.2 million to allow 20,000 more students the opportunity to enroll in a CSU for the next school year. Turnage mentioned a report that said there was a large amount of applicants who applied to the CSU this year who were not admitted because the state did not have the finances needed to accommodate them.

“More students (mean) more tuition fee revenues. However, tuition cannot cover it all,” Turnage said. “So we are asking the state to make an investment of less than $4,000 for each student. I think that this is a justifiable investment.”

As Turnage’s presentation came to a close, the floor was opened for questions. It was here that a nearly hour-long heated debate regarding how to reasonably meet all the needs within the CSU without overtaxing the board began.

Trustee Steven M. Glazer said he did not feel the request outlined in the support budget was the best way to meet the financial needs.

Turnage explained that the Committee of Finance is requesting $15 million from the board for three consecutive years. The plan is to allocate the money for debt service in bonds for $250 million. This money will be put toward priority project work and repairs that amount to $800 million.

The support budget proposal indicates that the three-year $15 million plan will not be set in  stone. If the financial situation during year two or three prohibits the board from making this investment, then other arrangements to meet these needs will have to be implemented.

Glazer said he wants to be sure that the board can financially handle the three-year arrangement before committing to it.

Turnage explained that the way the tentative budget is set up, if there is financial strain within that fiscal year, the board does not have to supply the money.

It was then that Chancellor Timothy White entered the debate. White said that he understands the risks, but the board has gone without fixing these maintenance issues for some time now, and it is time to act.

“We can continue to cross our fingers and hope for a better day…or we can take action. We do have a responsibility to protect this massive infrastructure that has accumulated,” White said. “We (have) thought deeply about (a better solution) and have not found one. And we’re increasingly worried about the fact that we have not taken an action. We have to have something in place to start this process.”

In the end Glazer moved to amend the proposed support budget for the 2014-2015 fiscal year and to see if there were any other less-risky options for the board to take. His amendment was seconded by Trustee and Vice Chair Lou Monville.

In other news, the Committee on Educational Policy updated the board with new information about the Student Transfer Achievement Reform Act, also known as SB 1440.

SB 1440 works to decrease the amount of unnecessary courses students are required to take in the community college level that are not transferrable in the CSU level.  This initiative will ensure that students spend no more than 60 units completing their associates degree, and 60 units obtaining their bachelor’s degree.

“We’re trying to solve a different problem here,” said Eric Forbes, assistant vice chancellor of student academic report. “With transfer students the problem we are trying to solve is that they come in having taken too many courses that aren’t transferable in the CSU.”

Attempting to get community colleges to offer these degree programs is a continued goal.

Journalism, for example, is a major that is not transferable as an associates degree in a handful of the CSU’s, including CSU Northridge. The courses required to attain an associates degree in the community college level do not line up with the courses required and recognized by these CSU’s. This is what SB 1440 was instituted to rectify. This transfer reform act attempts to bridge the gap between the community college and CSU level so that students are not wasting time and money on units that are not transferable and recognized.

The committee is still working with community colleges to align their course requirements so that students will cease to enter a CSU having taken unnecessary courses.

Further results and findings will be discussed at the next meeting.

“It has literally been a very educational experience. I am learning more of the ropes and as time progresses I shall be more productive,” said the CSUN Computer Science Department chair.

Stepanek has served as chair at CSUN for 14 years and has been a professor at CSUN since 1993. Stepanek also serves as the CSUN faculty president.

“Last week was ASCSU (Academic Senate of California State University) and in the past I had been a member of that particular board as a representative from Northridge, and now I was attending that particular meeting as a faculty trustee,” Stepanek said. “So even that week of activities put me in a very different perspective in terms of the different committees I’d be on and how I’d be contributing.”