A band for school spirit and music 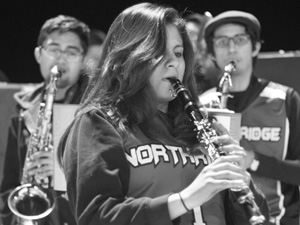 The Matador Pep Band arrives early before the sporting events. They need to figure out how many are attending and what songs they are prepared to play.

The band is one of the loudest groups during the game. Each member is as loud as the next, their sound echoing across the field and the campus.

The game is over, and whether the team wins or loses, the band is still there playing. Their school spirit and dedication to playing music and having fun is evident before, during and after each event.

“These games, they would be kind of lame without anybody just trying to hype up the crowd,” said Laura Marquez, 21, a junior deaf studies major and vice president of the Matador Pep Band.

The Matador Pep Band is a branch of Matador Spirit, a collective of student organizations that cheer at CSUN sporting events.

There is an incentive for many of the students to join the band and perform. The students receive priority registration for playing at 10 sporting events, according to several members of the group. However, this has led to the number of members in the group to fluctuate between practices and sporting events.

Taffy Hui, 20, a junior music education major and music director for the Matador Pep Band, said a group of music majors formed the group six years ago. However, non-music majors began taking over as the music students became to busy with the music department.

“Pep band is basically the only place that you can go to, to still play music and not have to worry about the amount of skill you have,” Hui said.

Patrick Cruz, 20, a junior kinesiology major and drummer for the pep band, said the group allows him to experience the fun and camaraderie from high school band.

“I feel like a part of a family,” Cruz said.