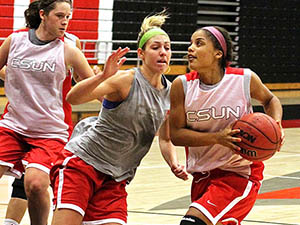 Junior point guard Ashlee Guay has been a nightmare for opposing defenses in the Big West since she became a Matador three years ago. She has also won multiple awards and shattered records, but she isn’t even close to satisfied as she looks to take it up a notch this season.

Guay has approached her preparation this year slightly different than previous ones. She is trying to eat healthy regularly, along with concentrating on conditioning and shooting drills.

As captain, Guay knows she needs to take every practice seriously as her demeanor and dedication will rub off on the younger players.

“Our coach is always telling us as players you’re being watched, and as captains your teammates are watching you on and off the court as well,” Guay said. “So you always have that responsibility. You take it as a chip on your shoulder. It gives you the right mindset, always be focused, hold yourself accountable, be an example to everyone around you and just be a good person in general.”

That is why Guay puts so much effort into her defense. She has set CSUN women’s basketball record for most steals in a season as a freshman, 91, then broke her record as a sophomore with 93. Guay admits that she prides herself on defense, no matter how the game is going.

“When offense is not going well for you, all you can do is focus on defense and help your team out any way you can. So defensively, I think that’s where I work the hardest because sometimes offense isn’t going well,” Guay said.

Off the court, Guay is like any other athlete with pre-game rituals. Her pre-game meal of mashed potatoes, chicken and garlic bread is a must. She texts her mom for a pep-talk, listens to music, and at games when her parents attend, she gives her dad a fist bump and her mom a kiss on the cheek.

The junior from San Diego was All-Big West Second Team last season and awarded captaincy for the Matadors leading the team in scoring and assists. Although the Matadors struggled last season, Guay sees a whole different team this year.

“I have pretty high expectations this year,” Guay said. “I think our team is way more developed than we were last year. We have a lot of experience.”

Her main concern for the team’s progress is consistency. She expressed tendencies of inconsistent play, behavior and attitude last season.

Guay’s approach this off-season was focused on leading by staying alert and mentally strong for her teammates.

“I now have a better relationship with coach (Jason Flowers),” Guay said. “I feel like I ask more questions now, so I know what to do when I get out onto the floor to be mentally prepared for the games.”

Flowers praised his point guard’s toughness, fearlessness and leadership as a reason for the success of the team.

“She has been instrumental to the growth of our program,” Flowers said. “I think she’s a talented kid who maybe thinks like an overachiever or approaches it like people don’t think she’s that good. So when you have that combination, it has allowed her to develop into a great leader.”