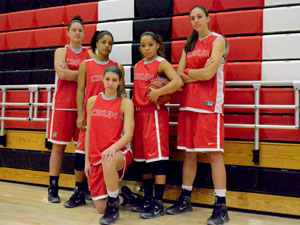 The CSUN women’s basketball team returned its core group of players from last year and is looking to make a run at the Big West Conference Championship.

This season, head coach Jason Flowers is optimistic his team can finish over the .500 mark, so long as everyone strives to better themselves both individually and collectively.

“My expectations are the same every year, for us to work hard every single day to become the best team we can possibly be,” said Flowers. “We have things that we want to accomplish as a team and a program but that all starts and ends with us coming to work every single day to get better and improve.”

The Matadors are led by returning junior guard Ashlee Guay, who started all 32 games for CSUN last year and was named to the 2012-2013 All-Big West Second Team.

Guay averaged a team-high 13.2 points, 3.9 assists, and 2.9 steals per game, leading the Big West Conference in steals for the second straight year.

She recorded a career high 28 points in the Matadors victory at UCLA and ended the season ranked sixth in the Big West Conference in points per game.

With a handful of new additions, Guay is confident her team can do well throughout league play. She feels that a year of experience under their belts will benefit them this season.

On a personal level, Guay plans on becoming more of a leader and helping her teammates rather than focusing on herself and her mistakes.

“Ashlee is tough, relentless and fearless, and she’s developed into a very good leader,” said Flowers.

Junior guard Cinnamon Lister will also be relied on to step up into more of a leadership role alongside Guay.

Lister transferred from Boise State in 2012 and had to sit out the season in accordance with the NCAA Women’s Basketball rules.

She spent two years with the Broncos and averaged 3.2 points, 1.4 rebounds, and 2.1 assists in 61 career games.

Although Lister believes the strength of her team is their cohesiveness, she still feels they can improve on the defensive end.

“I think some improvements we need to make are offensive rebounding, and our defense overall. Offensively we’ve been able to shoot the ball a little better,” said Lister.

With the combination of talent, experience and character, Flowers has high hopes for the team this year.

“I think it starts with talent, you have to have some (talented) players and we’ve been blessed to get some talented players into our program,” said Flowers. “I think you have to have experience and this group is definitely at the stage where they’ve been through a lot and we have character kids in our program, and anytime you have those three things-talent, experience and character, you have an opportunity to be a contender.”