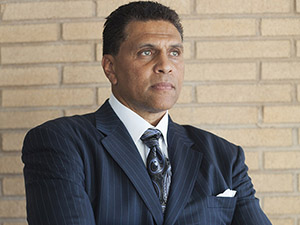 Theus, who coached the New Mexico State Aggies from 2005-2006 and the Sacramento Kings from 2007-2008, said that the most important part of his first year at CSUN is to establish a strong culture and style of play for his team. He plans to build a defensive, hard-working identity for the Matadors.

“We want to outwork the other (team),” Theus said. “I want my guys to have a defensive mindset, our identity is being a defensive-minded team. If you have that internal mechanism for your team, it will translate into wins.”

Though Theus plans to buckle down on the defensive end, he wants his offense — spearheaded by junior forward Stephan Hicks and sophomore forward Stephen Maxwell who last season averaged 15.1 and 14.6 points per game, respectively — to play at an uptempo pace, but not at a level fast enough to compromise their defense.

“We want to score points, we want to push the ball,” Theus said. “We will play uptempo. We’re looking to move the ball up the court and explore early offense. (We) don’t want to run and gun or leave our defense open to matchup problems. Our style and level of play will encompass uptempo basketball with solid defensive principles and a strong work ethic.”

The Matadors, who finished last year with an overall record of 14-17 (5-13 in the Big West Conference), got off to a quick start in the preseason beating CSULA 82-67 on Nov. 2, but Theus said he has no expectations in terms of wins and losses this season.

“What I plan to accomplish this year is to set the table, to build the foundation to where we’re going to go,” Theus said. “It’s a building year, but that doesn’t mean we don’t want to win every single game this year. Establishing a strong culture will lend to winning.”

Theus, who averaged 18.5 points and 6.3 assists per game throughout his NBA career, said he chose to come over to Northridge because not only is it the only show in the San Fernando Valley, the visions that CSUN President Dianne Harrison and new Athletics Director, Dr. Brandon Martin, have for the future of CSUN sports matched his.

“We’re changing the culture about sports in general here at CSUN,” Theus said. “We’re taking a whole new approach to where sports is a catalyst to bring national exposure to a school. To utilize sports how it’s supposed to be — to bring recognition and notoriety. The president and Dr. Martin have done a great job of creating a better campus atmosphere when it comes to sports. That itself builds pride.”

The Matadors have their home opener on Friday, Nov. 8 against Hope International and do not come back to the Matadome until Dec. 1 against La Sierra.