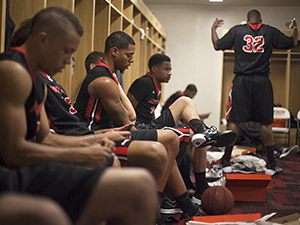 The Matadors men’s basketball season is underway and the team, along with the coaching staff, is anticipating a rebound year after failing to reach the Big West tournament in the 2012-2013 season.

The Matadors finished with a 14-17 overall record last year — 5-13 in the Big West conference, good for ninth place.

Arguably the most significant addition to the team this year is head coach Reggie Theus, a former NBA player and coach. Theus said he has seen good effort from the team so far, and feels that it will translate to success.

“I know that we’re going to play hard,” said Theus, who signed a multi-year deal with CSUN in April. “I know that these guys will work hard. And I really believe that’s how you win.”

Seven new players will be joining the Matadors this year, including sophomore center Kevin Johnson and senior forward Devonte Elliot, transfer students who tower at 6 foot 10 inches each. The two newcomers will give the Matadors much-needed size, a component that was lacking last year.

“I feel like the size is definitely going to help in the Big West conference because it’s how we got beat a lot of times because we were undersized,” said junior forward Steven Maxwell.

Greene feels the added size will take pressure off the guards, who had to carry the scoring load last season.

Theus also said he wants to incorporate an inside game to compliment the team’s uptempo style.

Greene feels the changes entering the season will have a positive impact on the team.

“I feel like this year with coach Theus’ experience (and) the whole coaching staff coming from different conferences and different philosophies, the makeup of our team really fits well this year.”

Returning this season are Greene, Maxwell and junior guard Stephen Hicks, all of whom averaged double figures in the 2012-13 campaign. Sophomore guard Landon Drew is also returning and will be the team’s starting point guard.

The Matadors will play 15 home games and 19 road games this season, including a five-game road trip starting at USC early in the season.

Theus believes the players’ talents will eventually dictate how they play collectively throughout the season.

“As a team, when we develop that identity, that’s the most important thing for us — our identity both offensively and defensively, more importantly,” Theus said.

CSUN started their season off with a win in their only exhibition game against CSULA and will host Hope International tomorrow night in the Matadome at 7 p.m.