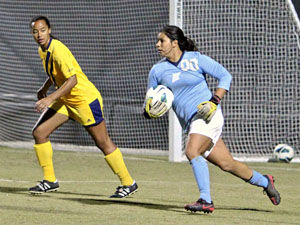 When Cynthia Tafoya, 20, enters the Matador Soccer Field, she is ready to protect her turf.

The junior English major with a minor in Journalism defends the net for the Matadors and has been a lynchpin on defense.

When on the field, Tafoya has adopted a certain tradition.

“I just really try to make my first play the best play so I can set the tone for the whole game,” she said. “It’s more like keeping my head in the game and positive self talk in my head throughout the game.”

According to Tafoya, the most intense match in her career so far was with Cal State Fullerton this season.

She recalls that it was a really close game and the Matadors ended up tying (1-1) and going into double overtime. During the match, Tafoya made nine saves, including seven stops in the second half, to preserve the draw.

“Everyone was cheering each other on but also instructing each other, so I think that made it even more intense,” Tafoya said. “Talking and buying into the same philosophy is really important for teams.”

Defender Amilee Smith, 20, emphasizes the importance of having Tafoya on the team.

“She brings a lot to the table,” said Smith.”Soccerwise, everyone trusts her in the goal…she makes us feel more united.”

Assistant coach Juan Plascencia said that Tafoya’s hard work and determination have helped her to improve tremendously as a goalkeeper.

“Her demeanor in practice has gotten a little bit more with the go-getter attitude,” he said. “She works hard and her attitude has definitely given her a better rate of improvement.”

Tafoya, however, has never considered becoming a professional soccer player. After graduation, she plans to get her teaching credentials and teach at Notre Dame High School, which she attended for three years.

“If I do start getting better and improving every game, then I will try (becoming a soccer player),” Tafoya said. “But for now it’s teaching and writing for my career.”