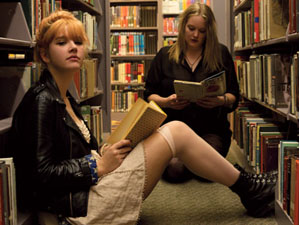 Los Angeles sister-duo, Bleached have been shredding ever since their early days in punk band, Mika Miko. Known for their edgy  sound, the girls have cemented their riot girl status in the music scene. Since the disbanding of Mika Miko, sisters Jennifer and Jessica Clavin have yet again risen and given birth to Bleached- a California surf style punk band that sounds off odes to heartbreaks and unforgettable boy crushes as heard on their debut album, “Ride Your Heart,” released earlier this year. But as these riot girls are become more and more popular by the minute, they still keep the San Fernando Valley close to their hearts.

The Daily Sundial got to speak with one half of the Valley-born sister duo, Jennifer Clavin, days after their recent U.S. Tour where she spoke about the record, Mika Miko, groupies, personal style and confessed her love for the endless pasta dish at Chi Chi’s in Northridge. 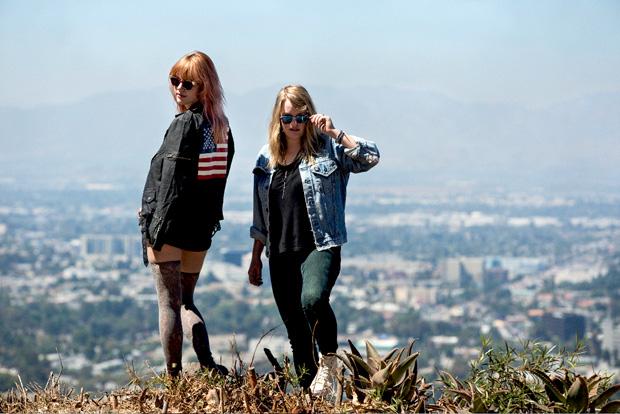 DS: You girls just finished your North American tour a few days ago. How was it?

JC: It was really fun, it was like a month long and it was just really crazy because it started on the west coast and a week through Canada and then just kind of stayed in the Mid West and normally, like, when we go on tour it’s not like that at all. We’ll go West Coast, you know all the way to the East Coast and come back, but this one had a weird schedule because we had to fit festivals in and part of the tour was with Best Coast, but it was really fun. I’m glad to be home though.

DS: In a few days, you’re going on another tour, this time all over Europe. What are you most excited about?

JC: I’m really excited because we’re going to Iceland and then also we get to tour with Veronica Falls and they’re my favorite current band. They’re so good and they sound so good live too.

DS: Does constant touring ever get tiresome with the little rest you get between tours?

JC: Yeah, I feel like after this tour I’m so ready to come home for a second and chill. But also whenever I’m home, I’m like “Aw I wish I was on the road.”

DS: Tell us about any crazy or weird tour stories.

JC: Umm…yeah there’s a lot [laughs]. So on the tour, before the last one we went on, we were on tour with this band called Hunters and they had a tour van and we were all dancing on the roof of their car to Metallica and their drummer jumped off. This is like the second day of tour, and he just jumped off the roof and broke his foot and so he had to walk around with a cane the whole tour. But none of us saw it happen and we were like “uh…what happened to you?” and he was like “I was on the van and jumped off” and we were like “when did that happen?” and we felt kind of bad that no one saw it. [laughs]

DS: Time to fess up, does Bleached get a lot of groupies?

JC: Like guy groupies?! Every show! No, I’m just kidding- not every show but I want that to be my answer. I mean, it happens. Well Jessie has a boyfriend but I’m single…so ya’ know ….When I was in Mika Miko, I didn’t care about that at all. I was like “whatever, guys are so gross.” But now I’m like “whatever. This is fun. I got to take advantage of it.” [laughs]

DS: Ride Your Heart was the soundtrack to this past summer. Were you surprised by the amount of attention you received?

JC: I guess so, yeah. I’m just  so happy that people really like it and relate because we put so much work into it, so it just means so much to me.

DS: How is the attention you received with Bleached different from when you were in Mika Miko?

JC: It’s funny cause it’ll be like a comedy show. They’ll be people like “I still wish you were in Mika Miko” or “I miss Mika Miko” and they’ll be people like “Oh my god I love Bleached so much.” But I think that a lot of people expect since we were in Mika Miko that Bleached is going to be Mika Miko and sound like it. And its like no, we grew up and learned how to play our instruments better and now we care about what we’re singing about. I mean I loved Mika Miko because it was a part of my youth. 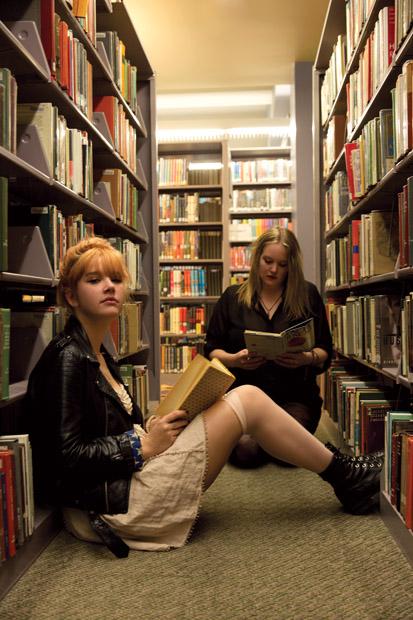 DS: The music videos you’ve released so far for all your songs are really cool. Who comes up with the story ideas and what or who influences these ideas?

JC: Well the very first one we ever made for “Dazed,” Jessie [Clavin] and I did that and we were trying to make it look like an Andy Warhol movie and then the second one we did was for “Think of You” and I did that with my friend Lana [Kim] and I just had an idea in my head and we just went over it. I have a big say in them and Jessie does too because when we first started, like we didn’t even know how much we’d be able to play because I was living in New York studying fashion and playing with Cold Cave and Jessie was in L.A. and so we were like “Oh we can just write music and put out music videos” so we were just excited to make [making videos] a part of Bleached too.

DS: Speaking of, you uploaded a photo onto Twitter of you scouting location ideas for “Love Spells.” What’s the idea for that video?

JC: That’s actually what I’m doing today, like putting everything together. We’re going to be playing at a graveyard with all these mummies and zombies coming out at the graveyard. We’re filming it at a park and we’re just going to make it look like a graveyard because it was getting so complicated with the permits because you’re not allowed to film in them I guess. [laughs].

DS: You mentioned you were living in New York and studying fashion for a while. Who are your main style influences?

DS: How would you describe your style in three words.

DS: Where are your favorite places to shop in L.A.?

JC: It was rad because it forced us to just like make music and if we wanted to go anywhere we had to take the bus. But I feel like when you’re in high school and you take the bus with your friends is like so fun. We would just take the bus to go down to Hollywood to watch shows and just hang out. It was really cool because my other best friend, Jenna, who was also in Mika Miko, and Jessie, my sister, since all three of us lived so close to each other we would always just hang out and just play music and I lived near the Porter Ranch area, like I literally lived across the street from E.T. park. I went to the park recently with my friend because you know that restaurant in Northridge, Chi Chi’s?  Okay well that place is like the best. You know what’s really good there is the endless Pasta dish and it comes with a salad and a drink, like you can get a glass of wine and the salad is so good, it’s like crazy [laughs]. And then you get the pasta and you get whatever sauce you want. Like their marinara sauce is so good and you can just keep ordering more and more. They just keep filling up your plate for you. They only have them in Santa Clarita and in Northridge. So anyways we went and ate there and I was like “Oh I want to show you where I grew up” so I took him up there but he’s like gay so we weren’t going to make out or anything [laughs] but the police totally came and were like “You need to get out of here!” and I was like “What the hell!”

DS: You should definitely play at show at CSUN.