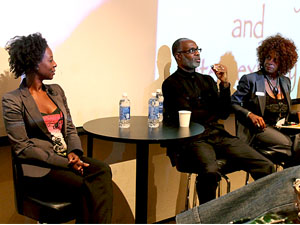 The USU theater filled quickly on Tuesday night when the Civil Discourse and Social Change initiative presented the documentary “Dark Girls” at CSUN.

Theresa White,  professor of Pan African Studies, welcomed the audience and introduced guest speaker and the director of the documentary Channsin Berry and producer Tammi Smalls.

The screening was from approximately 4:25 p.m. to 5:40 p.m. and displayed a controversial film based on the issues of colorism in black communities,  prejudices amongst black women in society and the negative connotations associated with being a “dark-skinned” black woman.

Within the film, the opinions of black women and men, psychologists and other experts were deconstructed. The room was left in silence at times throughout the documentary as those in attendance stared intently as they witnessed open prejudice on the screen and to others it reiterated beliefs that they had known unfortunately existed.

“I’m glad that there are people like Channsin Berry who are informing people that being dark-skinned can mean beautiful no matter what others may choose to believe,” said freshman theater major Tateauna Williams. “It is unfortunate that dark-skinned individuals carry this stigma of not being beautiful.”

As the screening came to an end, Berry, Smalls and White took the floor for open questions and answers.

Berry talked about his personal experiences with biases and how growing up, he had to deal with the same issues that most dark-skinned individuals did. He revealed that this was part of the reason he decided to make a documentary about such a topic which he believes is not talked about enough in educational facilities.

During open questions, a member of the Black Student Union Club on campus pointed out how the documentary showed the disunity of the African-American community. In response to the question, White repeated a quote said by a psychologist in the documentary, “You have to be in love with your soul before anyone.”

Many audience members applauded as they agreed with the statement. Smalls also took the time to talk about the show she produced, “My Black is Beautiful” which is a program on BET.

The show is about the importance of having more color people in the media because of the lack of exposure due to the negative attitudes of dark-skinned individuals. The night ended with a more intimate discussion that took place in the Balboa Room with Berry.  People were able to ask him questions on a more personal level.