Unified We Serve members work to collect cans and food 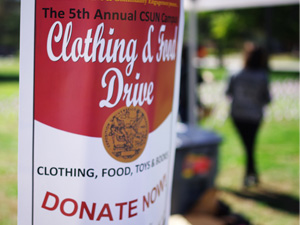 As the autumn wind ripped through the Sierra Quad, knocking objects and sometimes people over, Unified We Serve (UWS) members battled the cold and continued to work for a good cause.

The fifth annual Clothing and Food Drive held by UWS started on Nov. 4 and has already been a success.

“So far we’ve already got a lot donated,” said Penelope Lopez, a junior majoring in Journalism with an emphasis in Public Relations.  “We don’t have a goal in mind.”

Lopez is determined to collect as many donations as possible. UWS has already collected three rolling-trash bins full of donations and plans to collect much more.

Donations will be sent to Meet Each Need with Dignity (MEND), a San Fernando Valley based non-profit that serves an average of 49,000 poverty-level clients each month, according to their website.

With no relief in sight, the wind continues to knock over UWS signs, and even their canopy, but that doesn’t stop any of the volunteers from continuing to handout paper bags to students for any donations they want to return within the next week.