There’s race and then there’s color 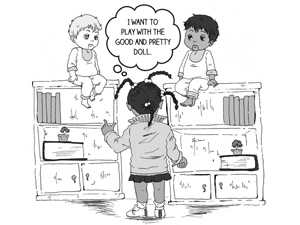 Colorism stops us from seeing how beautiful all black people are

In my mind I thought this would be a simple subject to write about. But the deeper I delve into the issues and the more I recount experiences from my past, pain begins to surface.

I wrote this opinion as I watched the documentary “Dark Girls” made by D. Channsin Berry and Bill Duke, which was screened at the USU Theater on Nov. 5.

This documentary touched on the issue of “colorism,” which is still very relevant within the black community. Colorism is defined as the prejudice within a particular ethnic group based on the lightness or darkness of one’s skin.

Within black communities, the issue of colorism has been perpetuated for centuries, starting with slavery, and continuing even after blacks were emancipated in 1853.

In an effort to keep slaves from uniting and overthrowing the system of slavery, white slave owners kept slaves divided by turning them against one another. Light-skinned blacks were given special privileges that dark-skinned blacks were not. It was common for dark-skinned blacks to be in the field and not to be permitted in the master’s house, whereas light-skinned slaves were house servants, wagon drivers, doormen and more.  In this way whites turned blacks against each other: light against dark, old against young, woman against man. And these divisions continue to affect the black community today.

I consider myself a dark-skinned black woman.  I grew up in a family of light-skinned siblings and parents. They all looked as though they belonged together, and though my family never purposefully made me feel this way, I have always struggled with a sense of not belonging.

I remember growing up feeling animosity, jealousy and even hatred toward light-skinned black girls. In my mind, the more you resembled a white woman, the more beautiful you were. If you had light skin, long hair, pretty colored eyes, you were the epitome of beauty. As a dark-skinned, short-haired little girl I remember doing things to overcompensate for my lack of “beauty.” I was really mean as a kid and at times I was considered a bully. I did not attempt to attract boys or entertain relationships because in my mind, no one would want me.

These prejudices are learned, and it has taken me a long time to rid my mind of the lie that black is bad, dark is evil, white is good, white is pure.

As a 23-year-old black woman I find myself struggling with being perceived as intimidating, strong-willed, and too Afrocentric by black men, especially in a college setting. The reinforced stereotype is that dark women are mean, have attitudes, are too independent, that we don’t know how to let a man be a man, etc. And what results is the development of more independent, more strong-minded dark-skinned black women.

I myself have been called confident, secure and independent on countless occasions. And whenever I receive these compliments I smile and say thank you, though on the inside I am chuckling. If people really knew the insecurities I combat everyday as a chunky, dark-skinned, black, single woman, they would be surprised that I am able to get out of bed in the morning.

And yet I do rise every morning, blessed and grateful for another day. Even though these insecurities surface from time to time I have learned that life is too short to live unhappily and hoping to be someone other than who God created me to be.

I am black. I am dark-skinned. I am overweight. I am tall. I have full lips. A wide nose. My hair is kinky and soft. I am a “dark girl.”

And I love myself.

My hope now is that one day my black people (whom I must add are the most beautiful, brilliant, and strong group of people I know) will stop perpetuating a cycle that was set up to keep us hating one another and tearing each other down. Though hatred, jealousy and division were instilled in us during slavery, we do not have to continue passing on the lies to our children, nor to one another.

I have already started to tear down this self-mutilating mindset. You can be next.

Until freshman year of college, I had no idea there were divisions within the black community based on skin shade.

This practice of looking at different shades of black is rooted in ancient history. People with African heritage who had lighter skin had a more privileged position within society, which increased conflict and tension amongst blacks.

People of mixed ethnicity with African heritage were never considered white and not quite considered black.

Fast-forward to freshman year of college. I had a “dark-skinned” roommate and a “light-skinned” best friend. They were responsible for introducing me to the animosity between light and darker-skinned girls. They clashed immediately and this was beyond my comprehension at the time. Weren’t we all black? Doesn’t society see us all the same anyway? Unfortunately, predominantly black communities are divided by skin shade.

It seems as though people are always looking for a way to divide when they should be coming together.

This same light-skinned friend grew up in a predominantly black city, Inglewood, and explained to me the light-skinned complex. The roommate had immediate disdain for the best friend because she sensed/assumed that this friend believed that she was “better than” and “more beautiful” than her because of her lighter skin. The best friend had immediate disdain for the roommate because she assumed the roommate did not like her because of her lighter skin, whether she believed it was jealousy or that she was in some way superior because of her skin.

The light-skinned complex is mostly spoken about by darker African-Americans who believe that lighter-skinned blacks think they are better than them and are ashamed of their race. If they recognized that black is beautiful, then it would be desired to have Afrocentric features and not Eurocentric ones. Is that really a light-skinned complex or is that society imposing this belief?

If darker-skinned blacks woke up one day with light skin and long hair, would they still believe that broad noses and kinkier hair were more beautiful? Most likely not.

There are beautiful darker girls, just as there are unattractive lighter ones. The hope is that society is moving toward a recognition of beauty in Afrocentric features as well. Not just their acknowledgment from a distance, not just to add contrast to an advertisement or to appreciate it as an exotic thing, but to view these features as true beauty.

In the hierarchy of shade, I am a brown. I never considered myself light-skinned, and still don’t, even after being categorized this way by my black friends. I’m somewhere in the middle.

Dark, smooth skin, kinky/curly hair and a gap between the teeth are beautiful qualities. I am not the only one to believe this, and with any luck my generation is challenging the shade hierarchy perspective.