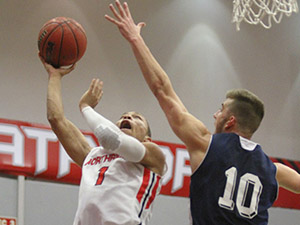 The Matadors (1-0) survived a three-point onslaught late in their season opener and pulled out a win against the Hope International Royals (0-1) Friday, 86-74.

CSUN led by as much as 19 in the second half, but the Royals fought back with nine straight points to cut the lead to 10. Junior guard Matt Green trimmed CSUN’s lead to only six on two deep three-pointers with 6:32 left in the game.

After six straight free throws helped increase the Matador lead to nine, Green answered back with another three — this time off the backboard — which forced a CSUN timeout with the score 71-65.

However, CSUN withstood the sudden flurry of points by the Royals with some more trips to the foul line and a three-pointer by sophomore guard Landon Drew, which put the Matadors up by 12 and sealed the victory.

“A lot of it came from our defensive breakdowns,” senior guard Josh Greene said of Hope International’s hot-shooting second half. “We didn’t communicate on certain plays. A lot of it was just on us, just mental breakdowns.”

CSUN did most of their damage in the first half. After a start to the game which saw both teams not able to pull away from the other, Sophomore center Tre Hale-Edmerson drove through the lane, spun away from a defender and dunked the ball with two hands, giving the Matadors a 30-25 lead.

Hale-Edmerson’s thunderous throwdown ignited a 12-0 run by the Matadors, ballooning their lead to 15. Even with the second-half rally, the Royals never recovered.

“I thought their offensive execution was solid in the half court, but in the first half, I thought they really pushed the ball well,” head coach Reggie Theus said of his team. “That’s why we had such a big lead.”

Also contributing to CSUN’s win was the school record 32 made free throws. They shot 97 percent from the charity stripe, attempting 33. Hope International made 14 of 18 free throws.

“We just kept attacking,” junior forward Steven Maxwell said. “We play inside-out, we’re a hit-first team and just drive the ball every time because we knew they couldn’t guard us. So we were getting to the paint every time and drawing fouls.”

Maxwell made and attempted a game-high 11 free throws and Greene made all eight of his foul shots. Stephan Hicks was the only Matador who missed at the line, going three of four.

“The guy that missed has to run tomorrow,” Theus said jokingly.

Maxwell led the Matadors with a double-double of 23 points and 12 rebounds on six-of-13 shooting and repeatedly found himself under the basket throughout the game.

“That’s who he is,” Theus said of Maxwell. “When I saw that he had an advantage, I just went back to him over and over, and he was delivering.”

Hicks contributed 20 points and 9 rebounds. Green led Hope International with 21 points and made five-of-six from the beyond the arc.

CSUN’s next match-up is a road game against the USC Trojans on Tuesday, Nov. 12 at 8 p.m.