From soldier to student: Veteran finds a home at CSUN 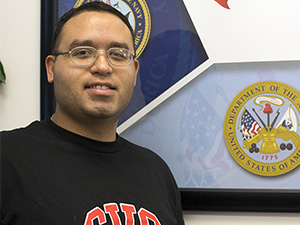 Waking up to an empty house, veteran Tomas Diaz whips up a bowl of cereal and snatches his keys as he strolls outside. Inside his car he enthusiastically turns the ignition key and backs up out of his driveway. It’s his first day at CSUN.

Eager to get to class, he treks across campus and arrives at his class. Settling in a seat, Diaz’s excitement turns to confusion when the professor walks in and utters the word “Moodle.”

“I was still under the impression that teachers gave out paper a syllabus,” Diaz said jokingly as he reminisces on his first day of school at CSUN, almost two years ago.

With his relaxed demeanor and charismatic persona, it’s surprising that Diaz, a 28-year-old business and supply chain major, is a wartime veteran. After graduating from Mission College in 2007 with an associate’s degree in liberal arts, Diaz made the decision to join the United States Army.

“During that time I was just drinking and partying and things weren’t being fulfilled and I wanted to do something more, I wanted to have a legacy,” Diaz said.

Going behind his parents’ backs, the Sylmar native met with his recruiter in secret. As the first member in his family to become a soldier, his parents weren’t about to wave the American flag with excitement. In the midst of the war in Iraq, Diaz’s parents were understandably worried, but that didn’t deter him from pursuing his objective.

“I kind of understand their perspective but I couldn’t have it hinder me because I wanted to pave my way in my legacy, so push comes to shove I got to do it,” Diaz said with a slight grin.

Deployed to Bagram, Afghanistan on Valentine’s Day in 2010, Diaz found himself working on force protection.  He would meet with people in the local area and conduct interviews with those who may have information.

As part of the job, Diaz made a conscious effort to become well versed in the city’s cultural dynamics. Something as simple as the Muslim greeting “as-salaamu alaykum, alaikum as-salaam” would be effective in collecting information and creating trust amongst locals.

Yet after four years of military service Diaz began feeling the trials and tribulations of Army life and in February 2011 he chose to take a break and is still currently on reserve.

He took a few months to reflect on his future plans, he enjoyed all the free time he had. A trip to Las Vegas and a skydiving adventure were some of many activities this G.I. did.

For Diaz there was no other school for him but CSUN. Even in the military, Diaz dreamed of coming back and earning his degree in business.

“The military is really good, you just have to think strategically,” Diaz said. “You treat it like the NFL, if you get hurt then you need something to fall back on, plan B. It’s just one of those things where I have these experiences but to be marketable I need to have my degree.”

Despite having to make up for lost time by catching up on statistics and accounting, Diaz found a way to reconnect with his military roots. He found a network of military veterans where he discovered the Student Veteran Organization (SVO).

At first Diaz was intrigued but wanted his first semester to be military free.

“Something that some veterans go through is that I want to do the college thing, so my first semester I wanted to get involved with fraternities,” Diaz said. “They welcomed me but something about the age group felt weird. I got my bed but I turned it down and I just wanted to focus on school.”

During his spring semester last year, Diaz became a member of the SVO. He eventually became vice president thanks to his ongoing motivation to help pave the way for other veterans.

Current SVO president Arturo Garcia remembers meeting Diaz at meetings and when the previous leadership departed, both him and Diaz decided to continue the SVO’s group mission statement of “Keeping the Warrior Spirit Alive.” Together, they worked on activities, events and socials to promote camaraderie amongst veterans, he said.

“Tommy’s dedication to promoting veteran awareness in and around campus is truly inspiring,” Garcia said.

As a graduating senior, Diaz isn’t sure what’s next. He said he could possibly be deploying back to Afghanistan and is more than willing to serve his country once again.

However, he would like to work in the aerospace industry while also developing a long-term project that would construct a veterans house for the Veteran Resource Center.