Meet the leader of the lady Matadors 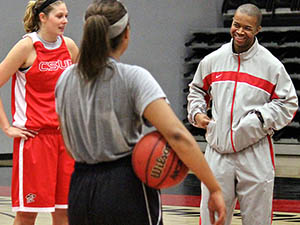 Growing up with a single mother, CSUN’S women’s basketball coach, Jason Flowers, exemplifies how one can overcome adversity and harness their environment for self-improvement.

“I grew up with a single mom in Watts and the coaches that I had helped develop me into a young man,” said Flowers. “They made sure I learned lessons I needed to learn. Because of those men, I was able to go on and do things that I didn’t think were possible.”

Flowers used athletics as his outlet and without a father at home, it was those who guided him in sports that would also end up guiding him in life. From a young age, Flowers was a vocal person, a trait which he believes helped him to eventually sway towards coaching.

“If you talked to my mom she would probably tell you that I’ve been coaching since I was four years old telling people what to do when we were playing basketball in the driveway,” said Flowers.

Flowers stayed true to his Southern California roots after graduating from Bellflower High School and playing Division I basketball at UC Irvine and UCLA. Flowers’ first college coaching job came as an assistant at Long Beach State from 2004-2008 before he helped UC Riverside reach the NCAA tournament during the 2010 season.

Flowers’ passionate and intense coaching style stems from his non ideal childhood in South Los Angeles and is also the cause for his caring of success off the court.

“I’ve been accused of having a coaching style that’s a little intense but that’s probably a product of my environment early on in life,” said Flowers. “We take a different approach. Just as important as success on the court is success off of it and building young women.”

Flowers has had a strong female influence throughout his life which has helped gravitate him towards women’s athletics and knows first hand how big of a role women play in our lives.

“Me being the product of a single mom, I can attest first hand how strong a woman has to be,” said Flowers. “I’ve been around strong women my entire life and that’s the goal in developing these young women so when they leave here they can be successful in whatever they decide to do.”

Knowing what women are capable of doing on their own, Flowers emphasizes personal development in his program and understands the importance of building the character of his athletes.

Being a UCLA alumni, Flowers has always looked up to former UCLA basketball coach and legend John Wooden- he even had the opportunity to meet Wooden. That has led Flowers to take what he has learned from Wooden and apply it to his own philosophy.

“I’m more John Wooden in my approach in that if we do what we’re supposed to do then the scoreboard will take care of itself. We need to challenge ourselves every single day to be the best we can be and at the end of it we can live with those results,” said Flowers.

Regardless of what it says when the clock hits zero, its the personal development and growth of young women that drives Flowers to do what he does day in and day out.

“If we do our job as a staff and I do mine as a coach then you’ll see it off the court and in the classroom and basketball success will become a byproduct of that.”