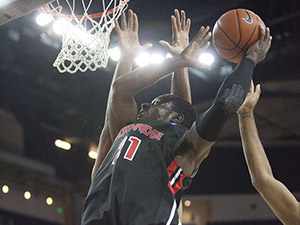 The Matador offense was ice cold, only shooting 33.3 percent for the game. The Trojans shot an efficient 57.1 percent and outscored CSUN in points in the paint, 50-26.

Junior forward Stephen Maxwell recorded his second straight double-double with 17 points and 12 rebounds. Senior guard Josh Greene led CSUN in scoring with 19, but only shot 4-15 from the field. Junior guard Byron Wesley had 16 points and 11 rebounds for USC.

The first half was a back-and-forth game of runs. CSUN got off to a quick start, scoring the first five points of the game. But USC answered back with a 12-4 run capped off by a two-hand dunk from freshman guard Julian Jacobs off of a lob pass from Wesley.

After junior guard/forward Stephan Hicks put in a jumper to cut the Trojan lead to five, USC went on a 10-4 run which consisted of either layups or free throws. The Matadors trailed at the half, 42-31.

CSUN had trouble with seven-foot-two senior center Omar Oraby all night. He scored 17 points, blocked two shots and only missed once from the field. His seven made baskets all seemed to come from inside the paint.

“He’s 7’2”, so he’s going to get a couple baskets like that,” Greene said of Oraby. “But it was a collective effort. We should have blocked him out a little bit more [and] made it tougher for him.”

The Matadors went to a zone defense to start the second half, which allowed them to stay within striking distance of the Trojans. But USC kept making shots and connected on 50 percent of their threes in the half.

Head coach Reggie Theus was disappointed with his team’s reliance on the three-point shot after making only five of 22.

“The one thing I am not happy with — we’re not a team that shoots 22 threes,” Theus said. “That’s not something that we do. I think that that’s too many threes.”

Drew agreed with Theus about the team’s overuse of the long ball.

Greene felt the Matadors were forced out of their high-speed running game due to USC’s effective shooting.

“In order for us to run, we gotta rebound the ball,” Greene said. “We gotta get defensive stops and if we’re always taking the ball out of the basket, then that stops our momentum. When we actually got defensive stops, we were able to push the ball and got good things.”

While this is the first loss of the season for CSUN, Drew felt the team’s effort was a positive takeaway.

“All in all, I felt like we really fought for the most part and I’m proud of how we played,” Drew said. “We didn’t back down.”

The Matadors travel to Fresno State for a road game against the Bulldogs on Saturday, Nov. 16.