CSUN student skips school to help her family in need 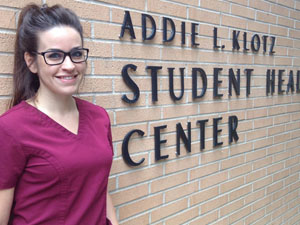 “When I was in high school, I did a lot of volunteering. I went to an all-girls’ Catholic school,” Chelsea said. “I volunteered for about two years at this elementary school in downtown LA.”

Chelsea explained that she worked at a school where she helped with a class of 10 mentally challenged children, and that was only the beginning. She would soon realize that her love and willingness for helping others would take her far.

After graduating high school, Chelsea started taking care of a 25-year-old male suffering from cerebral palsy, a disorder that affects muscle tone, movement and motor skills which is usually caused by brain damage before birth.

“I would change his diapers, feed him, give him his medications and just make sure that all his needs were met,” Chelsea said.

As hard as this experience was, Chelsea explains that it was the spark that set off the fireworks. It was just what she needed to realize that taking care of others was what she wanted to do for the rest of her life. Little did she know that the challenges she faced ahead would become the very core of her learning experience.

“My mom was diagnosed with multiple sclerosis which is basically nerve damage in the brain, so she can become paralyzed at any time,” Chelsea said. “This past February 2013, my grandpa moved in with us because of his Alzheimer’s, and he needed 24-hour care.”

“My daughter has been the hero of this family since I was told I had MS,” Donna said. “She will never know how much we appreciate all that she does.”

Although she had already been taking care of him for a couple of years, her grandpa is in the last stages of the disease, making his memory fade fast. Because of her parents’ busy work schedules and her sister’s commitment to both school and work as well, Chelsea took matters into her own hands and devoted all of her time to her grandpa.

“I had to quit my job. I was working at a Chevrolet dealership as a car salesman, and I was making pretty decent money,” she said.

With a well-paying job on her hands, Chelsea was able to pay her own way through college, without loans, scholarships or financial aid. However, after devoting her time to aiding her 91-year-old grandfather and being forced to quit her job, she also dropped out of school which pushed back her anticipated spring ‘14 graduation.

Her grandfather is grateful for what Chelsea has given up for him.

“She’s my baby and I love her,” Chelsea’s grandfather Richard Smith sweetly admitted.

With her grandpa now spending two days a week at an Alzheimer’s day care, it gives Chelsea another chance at school and catching up on her studies, which she is excited about.

“All the money that I have saved (from working) finally went back into this semester. After I graduate, I plan to pursue my master’s. There’s a specific master’s program in North Carolina that I want to get into. It’s a big move, across the country and I’ve never lived outside of California, but I’m ready to try something new,” Chelsea said.

Chelsea plans to continue her education in nursing school and perhaps even go for her doctorate after that. Her dream is to introduce the specialty of working with children to smaller cities and hospitals that do not know much about the topic, and eventually go to Third World countries to aid less fortunate children.

“Being a child in a hospital can be scary. Doctors are trained to fix them, but not make them happy and that’s where I want to come in,” Chelsea said. “I want to make children feel happy and not so scared. I want to be that chance that these children have at having a better life.”