Israel, you don’t get peace with war 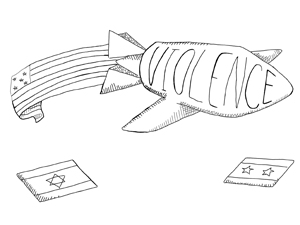 Ambiguous reasons, propaganda, pointed fingers, supposed peace talks and heated debate flow into a confused public all while people are losing their lives to reasons unknown to them. On Oct. 30, Israeli planes attacked a Syrian military base. To Israel, I ask to stop acting with aggression, warranted or not, to lay down its arms and find a more peaceful way to achieve a solution.

CNN reports that the base was struck down because it was suspected to have held missiles and other related weapons that could be possibly transferred to Hezbollah. According to CNN, the Israeli government has not confirmed the attack or commented on it as of yet.

“We don’t refer to foreign reports,” an Israel Defense Forces spokeswoman told CNN in the article.

Israel has been accused of several airstrikes within Syria this year, but has not commented on them. However it has been known that Israel holds the intent to strike down any convoy that would attempt to supply Hezbollah or any other terrorist organization that would threaten Israel.

But violence only begets more violence. Israel’s choice to choose conflict amidst an area of heated conflict will not lead to any solutions any time soon.

To explain clearly, Hezbollah is currently labeled as a terrorist organization by various governments around the world, including Israel and the United States. Hezbollah is a Shi’a Islamic militant group and a political party within Lebanon. Originally Hezbollah was founded as a resistance group to go against the Israeli occupation of Lebanon. It has since grown to have seats within the Lebanese government.

It is clear that Israel views Hezbollah as a dangerous and capable enemy.

It is narrow minded for Israel to view its only solution against a military power by striking back with violence. And while Syria is still stuck in its civil war, Syria does not need anymore bombs to be dropped on its soil.

Taking a step back from the conflicts, this month marks the 66-year anniversary of Israel, which was founded on Nov. 29, 1947. Sadly, the founding of Israel is ironic. Israel was a nation founded to be a refuge for the Jewish people after the atrocities committed by the Nazis during World War II. In an ironic twist, the land used for the nation of Israel displaced the Palestinian people.

Since then Israel has been involved with various conflicts with its neighbors. One of its conflicts with its neighbors, Lebanon, gave rise to Hezbollah. This in turn caused Israel to strike down Syria’s military base. Not to overly simplify such a complicated issue, but aggression in the past looped into more violence in the present, a sad cycle that comes with war and violence.

Despite the violence that Israel and its neighboring countries stir up, America continues to support Israel dear heartedly. Over and over we hear that America and Israel share the same democratic values. But really, what ideals do they really share? America and Israel share the same values of war and oppression of marginalized ethnic groups in the push to keep another group in power.

In an Op-Ed article written by Yousef Munayyer for the New York Times, Munayyer discusses the different experiences he and his wife have when they are going back to their homes in Israel. Munayyer and his wife are both Palestinian, however Munayyer is an Israeli citizen. His wife is not, although both reside in the same land claimed by the Israeli government.

Munayyer explains that there is only a 30 mile gap between his hometown and his wife’s hometown. And throughout the 30 mile gap, Munayyer explains that it is filled with walls, checkpoints and soldiers. If Munayyer were to live with his wife in her region, he would have to forgo his Israeli citizenship in order to prevent what Prime Minister Benjamin Netanyahu calls a “demographic spillover.”

The forceful separation of various groups and the discriminatory laws that uphold the separation isn’t too far from apartheid in South Africa or the Jim Crow laws in America.

Munayyer explains that in order for his wife to return to her home in Israel, she would have to land in Amman, Jordan, instead of Israel itself. And afterwards she would have to go through questioning at the border in order for her to get back home. Doesn’t this slightly remind you of Angel Island and the anti-Chinese policies that existed back in the mid 1800’s — denying people rightful citizenship despite having lived on lands claimed by the country’s government?

Returning home requires a humiliating questioning session to make sure you are who you claim to be. Returning home shouldn’t mean that you must run through a gauntlet of tests and checkpoints.

Israel, stop the violence and begin real peace talks. America, stop supporting Israel and hold them accountable for their acts of discrimination and violence. Israel is meant to be the bastion of democracy and the first nation that consists of a Jewish majority. However, realizing the fact that Palestinians refer to Israel’s founding as the “Nakba,” or catastrophe, puts a new perspective to the nation. Munayyer’s story turns heads as it is often not told by the media. But then again, these bastion of democracies (Israel and America), are righteous, right? No, these bastions are nothing but systems of oppression that only benefit the few through war and discrimination. And, sadly, the leaders of these democratic bastions want to continue to fan the flames of war. Change is needed, and it doesn’t look like it’s going to come from the leaders. It’s up to the people, the real movers of history.