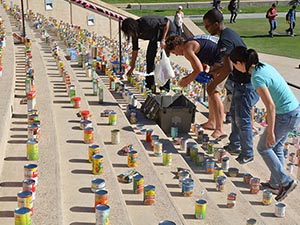 For those living below poverty or working with a low income, a well-balanced meal may be a luxury. One cannot truly comprehend the value of a can of beans or a hand-me-down sweater unless one has also experienced poverty. Donated food and clothing can make a tremendous difference in a persons well-being.

Based on a study in August 2013 from The Public Policy Institute in California, low income households made up over 16% of the population in 2011, and this number is on the rise.

CSUN’s Unified We Serve (UWS), a volunteer program offered by the Matador Involvement Center and Community Engagement (CE), a service learning department, partnered their volunteers and held their annual Clothing and Canned Food Drive from Nov. 4 to Nov. 13. The donations raised are given to Meet Each Need With Dignity (MEND), a non-profit organization dedicated to helping those living in poverty and to lead them toward self-reliance and financial stability.

Richard Weinroth, food bank director and executive chef of MEND, said “The collaboration with CSUN is fantastic. The Matador spirit and support of UWS volunteers is great.”

“[MEND] serves about 20,000 people and families every month. We would not be able to do this without CSUN’s help,” Weinroth said.

UWS and CE held a Commemorative Ceremony at the Oviatt Library lawn on Wednesday and announced the donation numbers. Among the donated were 9,013 non-perishable goods, 950 articles of clothing, 25 toys and 50 books. 10,038 items were donated in total, twice the amount from last year’s drive.

During the Commemorative Ceremony, UWS activities coordinator, Justin Weiss, gave a speech thanking those who volunteered.

“We could not have done what we did without all of you,” Weiss said.

He also thanked those who participated in gathering items to donate. Among those who donated was sociology professor, Dr. James Ballard whose classes collectively donated over 3,500 food items.