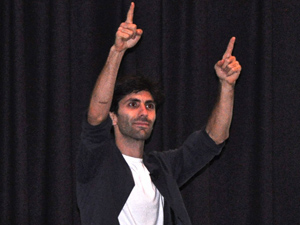 Applause and the flash of cameras welcomed Nev Schulman, the star of the documentary Catfish and the subsequent MTV series Catfish: The TV Show, to the stage of the fully capacitated Northridge Center in the USU on Wednesday night.

Using a series of anecdotes, personal photos and internet memes Schulman gave the audience a glimpse into his life and emphasized that the road to success is a road that is very rarely straight.

He had spiraled out of control until his brother was brutally honest with him about the person he was becoming, Schulman said. This revelation was the galvanization that propelled him to be a better friend and person all around.

Schulman said college is the time where people make connections with those who will be a part of their future lives either personally or professionally. He reiterated the importance of having a core group of people to challenge you to be the best person you can be.

“Be brutally honest with yourself,” said Schulman. “Find people who are willing to do the same.”

Marlene Santoyo-Rosales, 18, freshman kinesiology major, was randomly selected from the audience to take a selfie with Schulman but not before saying hello to all the self-identified single men in the room.

The path to the stage took her on a twisted route which Schulman used as an analogy of the road of life and reaching the finish line.

A fan of the show, Santoyo-Rosales said she was not falling in love via the internet, as Schulman did in the original documentary, and said she would stick to old-fashioned way of finding love after hearing his experiences.

Victor Molina, 22, senior and liberal studies major said he had never seen either the documentary or the show.

Working as a special events assistant in the USU for the event, Molina said he gathered from people waiting in line that Schulman’s work aims to help people realize the dangers of false identities of people online.

“I think this (Catfish) is the most relevant PSA (public service announcement)  because it resonates with us (college students),” said Molina.

Schulman also touched on buzzworthy topics such as safe sex, the need to make the not-so-elusive “dick pic” a thing of fiction and how important it is to think before you post to social media.

“As fun as it is, it’s just not worth it,” said Schulman. “Live your digital life with the same integrity and enthusiasm as your real life.”