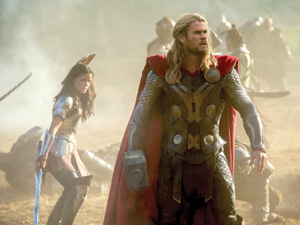 Another hyped up comic book film found its way into theaters this past weekend with the Viking sci/fi epic, “Thor: The Dark World.” The newest Marvel offering continues Thor’s story as well as the overarching Avengers plotline, and to no one’s surprise, these movies are still killing it at the box office.

The universe created by these films has tapped into people’s curiosity, allowing moviegoers to get a two-hour escape every year by watching their favorite superhero fight off another super villain while simultaneously wrestling with their own issues. The formula is tried and true, and has been working for years. And therein lies the problem: by taking a step back and looking at the bigger picture, you can’t help but notice that these are all just the same movie with a different face.

Marvel’s world of Avenger-associated superhero films has become staggeringly large since they began their ‘Phases’ in 2008 with “Iron Man,” not to mention the recent movement to television with “A.G.E.N.T.S of Shield” and the newly announced Marvel series on Netflix. In the time between then and now, there have been eight films put out by Marvel – half of them featuring Tony Stark.

The cracks in Marvel’s armor started to show not too long after the sequel to “Iron Man” was released. In the first film, we were taken by surprise. How in the hell did Robert Downey Jr. rise from the ashes and make “Iron Man,” one of the most watchable movies of the year? It’s simple, really. The guy has enough charisma to fill multiple trilogies, and seeing him play Stark is always a treat, even when the story around him gets repetitively ridiculous (looking at you, Iron Man 2 & 3).

The assertion that superhero movies are starting to lack originality isn’t a new one by any means, but it is one that is becoming increasingly obvious. There’s just not that much you can do with a superhero movie anymore. You’ve got the flawed hero (Stark, Thor, Hulk etc.), standard villain (with the exception of Loki), damsel in distress (Pepper Potts, Jane Foster) and a problem that is usually solved by a mix of big explosions and smashing the bad guy into multiple buildings.

It wasn’t until 2012 when “The Avengers” was released that things started to get fun again. The movie shouldn’t have worked, but writer/director Joss Whedon set the standard for how to take what was old and stale about comic book movies and make it fresh again by poking some fun at the giant ego of superheroes. Then a film like “Thor: The Dark World” comes along and reminds us that we’ve seen this all before.

The stories are essentially written before they’re even put on screen. And that notion is disregarding the comic book source material, and highlighting the fact that the audience can probably guess how a movie like “Thor: The Dark World” will end before the first act even begins.

That is not necessarily a problem, but more of a drag. Where are all the surprises? Can the hero once, just once, not come out on top at the end of one of these movies and save his triumphant return for the inevitable sequel? There’s probably not a definitive answer to that, but is it so much to ask?

For those who would say it’s unfair to just be picking on Marvel films, DC superhero films, while a bit darker, are also repeat offenders. The lackluster “Man of Steel,” jaw-droppingly bad “The Green Lantern” and even “The Dark Knight Rises” all suffered from ‘been-there-seen-that’ as well. And now with DC mixing up its characters (the forthcoming Superman vs. Batman film), it seems that the studios bringing us these flicks are about to have their cake and eat it too by mixing bankable heroes in one movie, while we as filmgoers are left to watch the same story be told to us every year under a different title.

But with all that said, it’s OK, because these movies are at the point where they don’t really have to try anymore. Not that those involved in the films aren’t giving it their all, they just recognize that the mechanism is working and there’s no need to fix it. People like watching something familiar, but at the same time they want to retain the feeling that what they’re seeing is somehow different from the rest. Despite playing it safe for the most part, these movies are still exciting and have fun with their premises, but eventually the predictability factor will catch up. When it does, lets hope “The Avengers: Age of Ultron” is there to pick up the pieces.