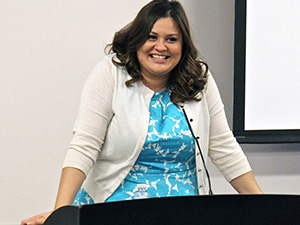 Kristyan Kouri, professor of Gender & Women’s Studies welcomed McDaniel and her husband Brian McDaniel, who appears on the show “TMZ”.

“She oversees ‘The Young and the Restless’, ‘The Bold and the Beautiful’, and game shows like ‘The Price is Right’ and ‘Let’s Make a Deal’,” said Kouri. “She also instituted ‘The Talk’(and) got that rolling.”

Mialisha Mccalipp, a freshmen biology major, was among the attendees.

“I wanted to know how she became successful so young. I think she is a good role model for women of color majoring in CTVA,” Mccalipp said, referring to McDaniel’s Mexican-American descent.

McDaniel shared her journey from college to CBS with attendees. She went to college two years early and then worked for a children radio network that eventually became Radio Disney, causing her to lose her job.

“You think you have this great thing and a minute later it’s gone,” McDaniel said.

After working in radio for over ten years, McDaniel decided to work in television and moved to LA. She was turned down from her first job interview, but then hired by the “Tyra Banks Show” to produce the show’s website.

McDaniel became the executive in charge of the “Tyra Banks Show” in the show’s 5th year and responsible for all the decisions of the show.

“It was really the cliché of you never know who’s going to be your next boss. You have to treat everyone with respect,” McDaniel said. “You can look at someone and talk down to someone because you think that they’re lower than you are and a year later you’re reporting to them.”

Next for McDaniel was working for “The Talk”. She was hired 64 days before the premiere date and was able to create the foundation for the show.

McDaniel provided guidance regarding what to do to be successful in any type of industry.

“Always be flexible. I have always had ambition and determination and have always been a hard worker, but I never had a black and white plan,” she said. “It’s great to have goals and a vision of where you want to go, but don’t get stuck.”

Using her own experiences in the entertainment industry, McDaniel was able to provide advice and knowledge gained from experience in the field.