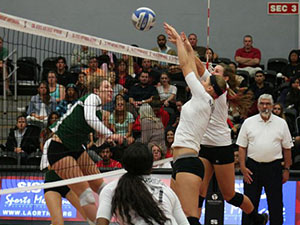 Although the Matadors hit .351 for the match, defense was the key to victory, as the Matadors held Cal Poly to a .000 hitting mark and piled up 14 team blocks. In keeping the Mustang attack quiet all night, junior opposite hitter Natalie Allen led the way with 11 digs, and senior setter Sydney Gedryn and junior libero Kelcie Randazzo added nine digs apiece.

Coach Jeff Stork felt the team followed his game plan as he said the scouting report was implemented well by the players.

“The fact that we got 14 blocks in three sets is significant, the fact that our hitting percentage was so high is a testament to how well and how hard our team has worked,” Stork said.

The CSUN offense continued to excel, as no Matador hit below .200 and six players had at least five kills. Junior middle blocker Casey Hinger smashed nine kills with a .500 hitting clip, while sophomore Cieana Stinson added eight kills on a .312 percentage. Freshman outside hitter Julie Haake matched a career high with five kills on a .500 hitting percentage as she continued to see increased time on the court.

Senior outside hitter Mahina Haina felt that the team came in excited to play and their confidence helped them play well.

“Our offense was firing on all cylinders, everyone was doing really well, Syd [Gedryn] was setting great, and the passing was good,“ said Haina, who contributed six kills.

The match played out much differently than when the Mustangs took CSUN to five sets in San Luis Obispo a month ago, as the Matadors maintained a healthy lead throughout the match.

The first set began with a series of long rallies, with neither team pulling away in the early moments of the match. A back-and-forth scoring sequence was broken up by a series of assisted blocks by junior middle blocker Sam Kaul and various teammates which led to a 14-9 lead. Two Mustang points later, CSUN went on a 11-2 tear to take the set, most points coming by way of a Matador kill and few by way of Mustang errors.

Cal Poly stayed close in the opening points of the second set, but would never grasp a lead.  Tied at 2-2, the Mustangs had an opportunity to take the lead following a spectacular dig by sophomore libero Nicole Kessler, but Hinger would come up with a huge kill to negate Kessler’s effort and keep CSUN ahead 3-2.

Scoring runs of 5-1 and 8-1 in the middle of the set would put the Matadors in control, and Haake and fellow freshman middle blocker Stephanie Serna would help close out the set with a late kill and a late block.

The Mustangs would grasp the lead early in set three, but the lead was short lived as Cal Poly gave up three straight attack errors after an 8-8 tie, giving CSUN the lead for good.

The Cal Poly squad would suffer a blow when sophomore setter Maddie Kuber took a hard fall after striking a kill to bring the Mustangs within four points at 14-10. Although she was unable to rise for a few minutes, Kuber was able to walk off the court under her own power but did not return.

Allen, Haina and Kaul would record a string of blocks late in the set which quelled the Mustang’s attempt at a rally, and Haake clinched the victory with a kill.

With the highest ranking in school history and increased national exposure with an ESPN crew covering the home stand, Stork doesn’t believe there’s any added pressure for his team.

“This is a very strong, seasoned group. We’re not surprised by what we’ve been doing.  Some of the media might be or some of the outsiders looking in but we were not,” Stork said.

The players shared the same belief, embracing the attention.

“I’d say its more excitement than pressure, coming in the atmosphere is better,” Allen said.

The Matadors will look to clinch a share of the Big West title and avenge their lone conference loss when they host UC Santa Barbara on Saturday for their home finale.  Seniors Gedryn, outside hitter Britney Graff, and Haina will be honored for senior night.

Following Saturday’s home finale, the Matadors will travel to no. 12 Hawaii and UC Davis for two important matches to close the season on the road.