The ComeUnity Band fills the USU with reggae at Noontime Concert 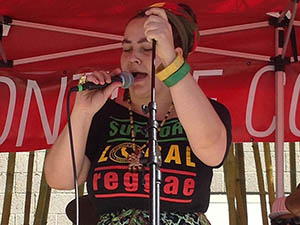 Dreadlocks and barefeet of members from The ComeUnity Band caressed the Plaza del Sol stage when USU’s Noontime Concerts kicked off Thursday.

The ComeUnity Band, a 6-person roots rock reggae ensemble hailing from Long Beach, initiated the first of three scheduled performances throughout the semester.

“(The) ComeUnity Band is about everyone coming together— one love, one life, one unity,” said lead vocalist Amber Moghadam.

“This semester, the USU are focused on adding a more cultural aspect to CSUN, and that’s reflected in the performances we have chosen,” said Joaquin Benavente, USU event assistant for music.

Students were invited to part take in a complimentary snack, offered to highlight the cultural diversity of each hour-long performance— in Thursday’s case, a vibrant assortment of fresh fruit. Most, however, opted to eat-and-run.

For those who stayed the USU set up canopied tables in the courtyard for students to seek refuge from the unseasonally warm November sun.

Brittaney Harvey, 18-year-old deaf studies major, said she was pleasantly surprised by the midday concert, and stopped for a moment to unwind and take in the music.

“I like their vibe and the way they’re getting into their music,” Harvey said.

“It’s tough to get creative with reggae, but I’m enjoying it (so far),” Melamed said in response to the bands songs.

ComeUnity draws inspiration from such artists as The Melodians and popular 1970s Jamaican reggae band, Third World. They have opened for Fortunate Youth and the LA Chicano reggae group, Quinto Sol, to name a few.

Band leader and lead guitarist, Gary Bogdanoff, and female bassist, Saki Anderson, are ComeUnity’s senior members, and have built an eclectic group over the past decade.

Dina Jefferson, a Compton native, has been the ComeUnity’s back-up vocalist for the past three years. “I met Amber through a mutual friend, who suggested I sing acapella for ComeUnity, and now here I am,” said Jefferson.

Keyboardist Jeremy Park rounds out the bunch, as the group searches to fill a more permanent position in the drummer slot.

Although the band’s next venue is a private residence (an event you can book for about $500 per gig), ComeUnity can be heard playing at local events and clubs near Long Beach and the LA Harbor region.

The next Noontime Concert will feature the pop band Billy Deen and the Rebels on Nov. 21 from noon- 1 p.m. The third, and final, concert on Dec. 5 will showcase music from the Indian composer and sitar player, Ronobir Lahiri.

Noontime Concerts are free to all CSUN students.