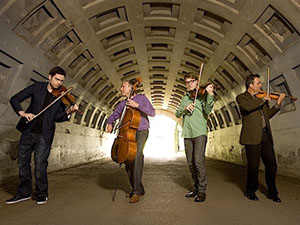 For Turtle Island member Mark Summer, the city of Northridge holds a special place in his heart.  The talented quartet along with special guest, singer-songwriter and multi-instrumentalist Nellie McKay brought their unique talents to the VPAC last Thursday.  As Summer greeted the audience, he shared that he grew up in Reseda and his sister graduated from CSUN.

Each musical piece was announced from the stage throughout the evening, which kept the audience on their feet as to what was coming next. All members of the group compose and arrange the music they play.  The percussive and plucking techniques demonstrated by the gifted quartet contributed to a sound one doesn’t hear everyday.  The joyful evening included pieces by artists including Jimi Hendrix, Bob Dylan and John Coltrane among others.

The humorous and talented Nellie McKay accompanied Turtle Island throughout the evening on piano, ukulele and mallets.  McKay’s voice was in fine form as she took the audience on a musical journey.  Inspirations ranging from Doris Day to Billie Holliday are heard from the moment she begins to sing.

As audience members exited the VPAC everyone seemed to be taken by the performance they had just seen.  Turtle Island and Nellie McKay proved that chamber music does not have to be “stuffy,” but instead a joyful affair that will definitely not be forgotten.