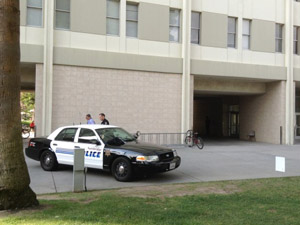 The suspect appeared to be in his late 20s or early 30s, and was overheard shouting obscenities as the officer escorted him to the vehicle.

“This is bullshit, I didn’t fucking steal anything,” he shouted.

It has not yet been confirmed if the man is a CSUN student. The officer on scene said that the man was being arrested as a part of an investigation and would not disclose any further information.