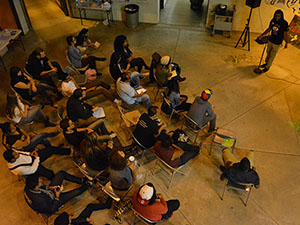 The sounds of hip hop, spoken word and poetry filled the lobby of Santa Susana Hall on Thursday evening at the second open mic event held by Vocal Artillery.

“This is a group of like-minded people who came together because we just wanted a conscious base for culture and expression and heritage and to just have a place to shine,” said Jamar Morris, 22 senior English major, and emcee of the event.

Yereni Ruiz, 20, junior gender and women’s studies major, said the idea to hold the event was conceived a few months ago.

“We just want to have an open space for people to express their art,” she said.

Though not an official club or campus organization, Vocal Artillery open mic nights are composed of a group of students who meet regularly to express themselves.

Students were invited to write their names on a sign-up sheet near the doorway. Morris began the event by asking the crowd to follow two rules: the first was to keep the energy going throughout the night, and the second was to show respect to the performers.

“It’s hard to get up here and share your story on the mic,” Morris said to the crowd. Morris then introduced the first set of speakers.

Hattaya Viriyanont, 23, junior communication studies major, read her poem on education, which included her view about the high cost of tuition.

“How come tuition fees go up every damn semester?

And how come students get sent to detention?

The only thing we should pay when it comes to school

Viriyanont said it was her first time speaking in front of an audience. “I was nervous but when I started to speak, I just didn’t think about it,” she said.

Morris recited his own poem about losing his mother to smoking:

“Death sits and watches comfortably from a distance

He lets her dig her own grave”

The energy flowed through the crowd, even when there were technical difficulties and the microphone did not work for the remainder of the event. The group continued to express themselves without a microphone.

Education was, again, one of the themes:

“I would love to show you my community

So, why don’t you pack your shit, and come take a trip with me

So you can see my frustration

Since you say we’re one nation

But even those who care about their education

Won’t get a chance to see a graduation

’Cause schools in my neighborhood keep losing their accreditation

In this one nation.”

The poetry and prose varied throughout the night and included hip hop and live music. The Women’s Resource Center helped sponsor the event.

Ruiz said the group worked hard to get the word out. “For our second (event), I think it’s a really good turnout,” she said.

Morris echoed her statement by saying they hope to have this event every month.  “It’s really important that we get momentum going,” he said.