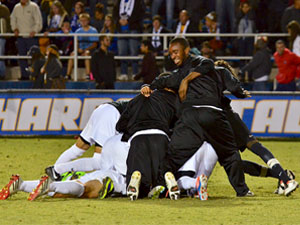 In defeating the Big West North Division champions, the Matadors will now face UC Irvine on Sunday afternoon for the Big West crown.

Coach Terry Davila, while acknowledging Lev-Ari’s performance, felt that his team’s speed was the key to victory.

“We knew Santa Barbara didn’t have a lot of speed up top, and we knew they had to rely on set pieces, so we made a conscious effort to get at them, attack them on the wings, and try and get behind them,” Davila said in a post-game interview.

After a scoreless first half filled with many substitutions and shot attempts few and far between, both offenses exploded in the second half. The Matadors attempted 10 shots and took three corner kicks as Lev-Ari scored two goals within a span of five minutes late in the match.

“I couldn’t ask for a better semifinal, I’m the happiest person in the world now,” Lev-Ari said.

Senior forward Beto Velasquez assisted on two near-identical goals by Lev-Ari as he stroked crosses to the right to find the head of Lev-Ari, who punched them in past the diving Gaucho goalkeeper.

Although Velasquez said in post-game comments he usually does not prefer setting up the attack from the right, he was happy with the result.

“We emphasize that we’re very fast in the wings and that’s what coach wants out of us. I try my hardest to give him what he wants, and we succeeded tonight,” Velasquez said.

The game got progressively tense as the teams traded the lead and tempers reached a boiling point when a Gaucho foul in the 87th minute caused the teams to exchange words and players were ready to fight.  Several players on both teams had to be restrained by referees and teammates.

Although the teams would somewhat settle down, the Gauchos were penalized with a yellow and red card in the final minute of the match, giving them four yellow and two red cards in the last 25 minutes of the match.

“Part of their strength is their emotion and it got the best of them late in the game,” Davila said.

The Matadors will now face a tough task in traveling to Anteater Stadium Sunday to battle UC Irvine (13-4-3, 7-2-1) for a shot at their second consecutive Big West title. The Anteaters have defeated the Matadors twice this season.

“Irvine does a number on us, they own us right now. We’ve got to get a little more mentally prepared and a little bit more tactically alert against them because they’re a fine squad,” Davila said.

Sunday’s match will be at 2 p.m. Regardless the result, the Matadors will wait and watch as the NCAA tournament participants will be selected on Monday.