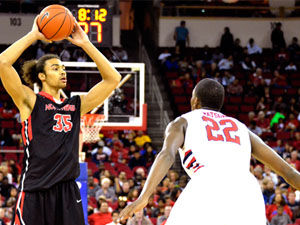 Points in the paint were a problem again for CSUN as they gave up 44 to FSU while only scoring 30. The Bulldogs shot 55.4 percent for the game to the Matadors’ 44.6 percent.

Senior guard Josh Greene scored a team-high 17 points and made 3-5 shots from beyond the arc. Senior guard Tyler Johnson led Fresno state with a double-double of 18 points and 12 rebounds.

After a close first few minutes of the game, CSUN found themselves down two with 8:36 to go in the first half, but gave up seven straight points — five coming from the free throw line — for a 27-18 deficit. After two free throws by freshman guard Aaron Parks pulled the Matadors within two yet again, the Bulldogs answered with a 10-0 run and ended the half with a 41-27 lead.

“I think in the first half of the game, we gave up too many fast break points. That’s why they got that lead,” junior forward Stephan Hicks said. “But other than that, I think we played pretty well.”

Greene scored five of his 15 second-half points in the first minute of the second stanza, and cut the Fresno State lead to nine.

“I’m going to keep playing hard regardless of whether we’re up 50 or down 50, it doesn’t matter,” Greene said.

But FSU exploded with a 15-4 run to increase their lead to 20. CSUN did not get closer than 15 in the half, and never led in the game.

Greene said the large first-half scoring run by the Bulldogs was a result of poor Matador shot selection and transition defense.

“They just played harder than us in spurts,” said Greene, who was visibly disappointed after the game. “We’re a way better team than that, so the harder team won tonight.”

CSUN was outrebounded by FSU 36-24, a disparity Greene thought was every player’s responsibility.

“We just have to be more sound fundamentally, which is boxing out,” Greene said. “It’s not just Maxwell and Tre-Edmerson and the bigs’ responsibility to rebound. It’s everybody. We can’t pinpoint it on one person.”

“We have to learn who we are,” Theus said. “They gotta understand that we’re not a jump-shooting team. We gotta take the ball to the hole.”

Theus also said the team has lost the last two games because of a lack of physical toughness.

“We don’t do the tough things,” Theus said. “Our problem is 50-50 balls. We have to get tougher and that’s a huge problem for us right now.”

Even though the Matadors are on a two-game losing streak, Theus feels the team can learn from the losses.

“I hope that these two games give us what we need to understand what we have to do to win,” Theus said.