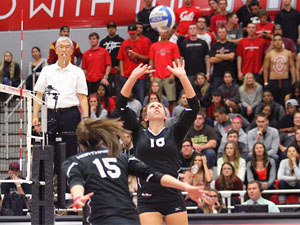 A trio of Matadors combined for 47 kills, but CSUN only hit .253 as a team and committed seven service errors in just their second conference loss of the season, both to UCSB.

Despite matching the Matadors in total kills, digs, and blocks, the Gauchos took advantage of slow starts by CSUN in the first and third sets and escaped in the final set with timely hitting, surviving a late rally by the Matadors.

Junior opposite hitter Natalie Allen believed a breakdown in passing was the reason for the loss.

“We passed really well in the fourth set, but the fifth set we started off a little shaky not passing very well and I think that’s the biggest thing for us,” said Allen.

Junior middle blocker Casey Hinger had one of her strongest performances of the season, as the former Big West Player of the Week hit 18 kills on a .395 hitting mark along with a match-high 17 digs. Allen recorded a double-double with 14 kills and 12 digs, and senior outside hitter Mahina Haina stroked 15 kills in her final home game.

“It’s sad, it’s your last game at the Matadome and you want to win but I think we fought really hard so it’s okay,” Haina said, giving the Gauchos credit for playing a well-fought match.

The Gauchos kept the Matadors on their toes early, as two five-point runs in the middle of the match first erased a deficit and later put UCSB up with a comfortable lead at 20-13. UCSB would cruise to a 25-18 win in set one, as CSUN dropped their first set at home since losing the opening set to Hawaii on Oct. 24th.

The Matadors would battle for a dramatic second set victory, as the Gauchos came from the brink of losing and turned a 24-21 deficit into a 25-24 lead heading into extra points. A kill from Allen and a Gaucho error would finally give the Matadors two straight points to clinch the set 29-27.

After trading the third and fourth sets, the Matadors came out flat in the deciding fifth set, as they were forced to call a timeout trailing 10-5.  CSUN would regain some composure and rally, as they scored four straight points to stay alive at a 14-12 deficit. Gaucho senior opposite hitter Katey Thompson would find a hole in the Matador defense to smash her 15th kill and clinch the victory for UCSB.

Coach Jeff Stork believed the team broke down in several areas during the game and will need to improve before their next match at No.12 Hawai’i.

“It might be the pass one time, or the set the next or the attack the next, or defensive schemes.  We’ve got to clean that up a little bit and make quicker adjustments,” Stork said.

In a pregame ceremony for senior night, the Matadors honored setter Sydney Gedryn, outside hitter Britney Graff, and Haina. The trio combined to play in over 1,177 sets and will all be among CSUN career leaders in kills, assists, blocks, and sets played.

The Matadors will travel to Hawai’i and UC Davis to close out the season as they continue to battle for the top spot in the Big West Conference. Although the Gauchos and Matadors have two conference losses apiece, UCSB holds the tiebreaker with their two victories over CSUN.