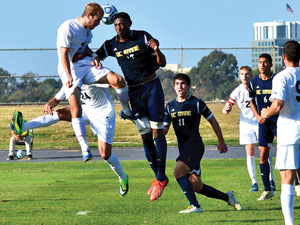 UC Irvine junior forward Cameron Iwasa received a shovel side pass from Enrique Cardens and found the back of the net in the 65th minute for the match’s lone goal. The goal came minutes after the Matadors missed on two corners from senior forward Beto Velasquez.

The Matadors pushed early as they forced Anteater sophomore goalkeeper Michael Breslin to make all four of his saves in the first half, including a sequence of three shots off of two corners around the 35th minute. The frenzy would be CSUN’s best opportunity at scoring until a header by junior defender Tanner Snedigar just missed the top crossbar in the 85th minute.

“It’s hard to be a defender and look for those offensive headers in the net. Usually I’m clearing them out but I tried my best and couldn’t get it in,” said Snedigar, who had three shot attempts in the match.

Junior forward Sagi Lev-Ari’s entrance into the lineup in the second half was rendered useless as the Anteater back line limited his touches and only allowed a header from Lev-Ari that sailed high, nowhere near the net.

Lev-Ari was suspended for the first half by the Big West Conference for unsportsmanlike conduct in the closing minute of Friday’s win at UC Santa Barbara, in which he taunted a player during a near-scuffle.

“We’re disappointed with not having him. I respect the decision, they sent a statement but we’re just a little disappointed it happened that way,” said coach Terry Davila in a postgame interview.

Davila did not blame the loss on the early absence of his star forward, rather giving credit to the UCI defense.

Although the Matadors still managed eight shots in the second half, the UCI defense never allowed a clean strike as they kept the ball in the midfield for the majority of the last 45 minutes.

Despite the loss in the championship game, the Matadors will most likely advance to the NCAA Tournament based on the strength of their ranking. Coming into the weekend ranked 25th, the Matadors defeated the No.10 UCSB Gauchos on Friday which should resonate well with the selection committee.

Senior midfielder Chris Smith feels that the team is ready for the NCAA tournament, but needs to score more as they have done in the past.

“We just need to want it more. We played good soccer but it just doesn’t always fall our way,” Smith said.

The Matadors will wait and watch the selection committee make their picks for the NCAA Tournament on Monday morning, as CSUN should be positioned well to make the 48-team tournament.