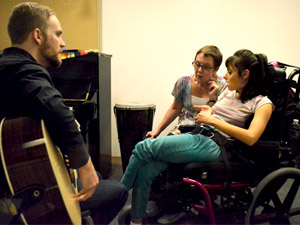 In the catacombs of Cypress Hall, surrounded by practice rooms in which budding musicians can be heard honing their crafts, lies room 150.

It looks much like other rooms in the building from the outside. But inside, July Berghofer helps run the Music Therapy Wellness Clinic, using music to help patients suffering from various types of disabilities.

“I just think because music is so innate in all of us — it’s something that we’ve got that we already have in our bodies, spirit and memories — that we, as clinicians, know what it is that we can draw from people and connect with people through music of any culture, of any age, without words,” said Berghofer, assistant director of the clinic.

The clinic was started in 1996 and works with a wide spectrum of diagnoses including autism, stroke victims, down syndrome, cognitive impairments and others, as well as teens struggling with mental health issues or substance abuse, according to Berghofer. The majority of her patients are unable to verbally communicate, and range from age two to 85.

One of Berghofer’s patients, who wished to remain anonymous, suffers from a rare genetic condition which has left her confined to a wheelchair and unable to communicate. Berghofer has been working with the patient since 2006.

During a recent therapy session, Berghofer and Scott Whelan, junior music therapy major, played and sang songs on guitar and piano in an effort to get the patient to sing along. The patient was also encouraged to tap a beat on a tambourine and a kick drum pedal.

Kelly Dempster has been the patient’s nurse for two and a half years, and feels her work with Berghofer has yielded positive results.

“It has really helped with her communication,” Dempster said. “I’ve noticed she’s always communicated well, and I think music therapy attributes to that.”

Dempster also feels the therapy has brought about unexpected results for the patient.

“Sometimes I’m surprised because a lot of times I do talk to her and I don’t get a response from her,” Dempster said. “To see how well she actually responds to the music — it is surprising.”

As part of the music therapy major, students take part in sessions with Berghofer and other therapists in one of four field work opportunities during their studies. On Tuesdays and Thursdays, students learn psychology of music, research techniques and familiarize themselves with different populations such as patients in hospice, the hearing impaired, geriatrics and others.

Whelan became interested in the field while working at a program for adults with disabilities and realized he wanted to merge those two passions.

“It’s a very powerful thing for people who can’t communicate, who can’t speak at all,” said Whalen, who is one of 24 students in the program. “It’s something that they can feel and understand and work towards. So it’s just a very niche, very unique mode of reaching out to people.”

Whelan is in his first year of field work and assists Berghofer with her patients. He shares her belief in music’s ability to heal.

“It has some kind of influence on anybody, like people from any ability,” Whelan said. “So it’s a very unique mode of tapping into wherever people might be in their different states or populations or disabilities.”

The music therapy program also offers two choirs for patients, one of which is called the Sunshine Singers. It started two years ago and patients are not required to audition.

“It’s become a really good social outlet for these young people [and] it’s run in a way where they have quite a lot of autonomy,” Berghofer said.

Berghofer said that each patient has an individual goal depending on their diagnosis. However, the program does have an overall goal.

“It’s really just trying to help them to see the strengths and to reach the potential as much as we can,” Berghofer said.

Whelan feels there can be goals for the patients of the music therapy clinic.

“I think its all about bringing their unique voice out,” Whelan said. “Music’s perfect for that.”