Sleepless nights pay off for former AS senator 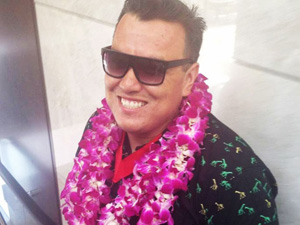 Paying for school wasn’t easy for Austin Ysais. Taking out loans was his biggest fear.

But he managed to pay everything out of pocket by reaching into the money he had saved from working full time.

“My biggest struggle was paying for grad school. I was lucky to have my parents pay for my undergrad,” Ysais said. “That was one less thing I had to worry about while getting my B.A. in history but when they told me they could no longer provide for grad school, I started to think of ways to pay for school.”

Though he would average four hours of sleep every night, Ysais, 25, knew that it was going to be worth it once he received his master’s.

By the second semester of grad school he became an expert on mapping out his daily schedule.  Ysais would commute 60 miles a day to work CSUN’s Associated Students from 8 a.m. to 5 p.m. followed by his classes. It would be 9 p.m. when class ended. He would be home by 11 p.m., get up at 6 a.m., and do it all over again.

“I had a very busy schedule. I never had time for myself,” he said.

And all his work did pay off. From being an undergrad senator of upper division social behavioral science to graduated assistant, he is now the activities coordinator at Associated Students on campus with his master’s degree in public administration.

“What I love most about my job is working with students and watching them grow as professionals and as individuals,” Ysais said.

As an activities coordinator, Ysais is looking to be noticed as a professional in student affairs at a university.

He became interested in Associated Students as an undergrad by becoming senator for upper division social behavioral science at age 19.

As a senator, Ysais was adamant about having one card where you could buy all campus necessities including room key, gym pass and dorm room key to mirror what they have at UCLA. Unfortunately, the idea did not succeed.

“Becoming a senator was one of the best choices I did in college,” he said. “It has opened up many opportunities, like meeting Dr. William Watkins which I am thankful for.”

Ysais made the decision to pursue his master’s degree after he met William Watkins, vice president of student affairs at CSUN. Watkins became Ysais’s mentor, guiding him through his undergrad, giving him advice of what route to take after he graduated.

During his senior year as a senator he was a part of the internal affairs committee, the branch of A.S. that deals with student government programs. During Ysais’s time, they established the Diron Rivers scholarship, in honor of a student who died due to cardiac arrest.

“It was the most surreal moment in life to see someone you know pass away. He was one of the most athletic guys I knew that would play basketball every day,” he said.

Ysais was thankful for his supportive girlfriend, Ashley, who was there for him in time of stress. She would comfort him and would help him study.

“Austin is an answered prayer and a dream come true,” said his girlfriend Ashley, who helped him study for his master’s.  He never fails to amaze me with his intelligence, love and passion to strive for excellence. He worked so hard to receive his master’s. Those study sessions sure paid off!”.

His plans for the future include continuing to grow in his position and one day become vice president of student affairs at a university.

“Austin motivates us,” said Eric Planas, senior producer at Associated Students. “He is beyond a role model for us. Always inspiring us to go beyond our expectations and always has positive feedback on all our work.”

He wishes to inspire students to never give up on their dreams.

“Some people say high school years are the ones to live for, but I believe the ages 18 to 23 we develop who we are,” he said. “These years are vital to student success and their future. They shape their persona by going through experiences as they mature from a teen to an adult.”