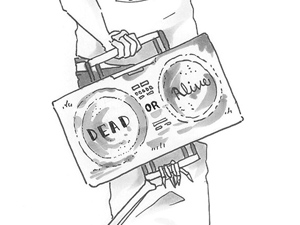 Hold on folks, what the hell? Did rapper LoveRance really say that he’s going to beat a vagina up? Oh yes he did. Folks, this is the state of the so called hip-hop industry today. I sadly announce that as of right now, hip-hop is malnourished and needs the love and attention that it once got.

Hip-hop has a rich history of being the voice of those who are disenfranchised. It was a way for many to express what it means to grow up, for lack of a better word, in the ghettos. Rap music back in the 80s and early 90s had a political stance and it meant something to those who listened to the music.

Rap groups such as A Tribe Called Quest or Public Enemy would challenge the political structure of America, questioning the government and asking for a redress of the grievances put upon communities of color.

Nowadays, the state of hip-hop has become something different. Artists like Lil Wayne, Nicki Minaj and Drake put up music that hits the top 100 Billboards. The music is popular, people enjoy it and they are constantly bumped in the club.

The beef I have with these artists and their music is that their music is not hip-hop, it is commercialized music that sells out an exaggerated black culture. In other words, their music is pop music and does not deserve to be labeled hip-hop at all.

While these artists may have had different music in their early mixtapes, the music produced now is shallow and disgusting. Because their songs are labeled under hip-hop, the true genre of hip-hop is rotting from the inside out.

Let’s take a look at Kanye West, one of the more popular artists out there. I remember on Facebook, everyone was proclaiming that West had dropped his greatest album yet, “Yeezus.”

They were claiming that Yeezus is revolutionary and is changing the face of hip-hop. I listened to his single, “Black Skinhead,” and was thoroughly confused about what West was trying to get across to his audience. It felt empty and seemed like West just used the beats and dark lyrics to catch attention. I admit, “Yeezus” is quite different from other hip-hop albums, but it was glamorized.

In contrast to “Yeezus,” his song “Jesus Walks” is clear in its message. Unlike the extreme beats of “Yeezus” and his confused lyrics, West clearly has a political message embedded in the song.

“They say you can rap about anything except for Jesus

But if I talk about God, my record won’t get played huh?”

Mr. West, these verses spoke to me. It showed the sad state of hip-hop today. You said it yourself, that records without guns, drugs, violence and sex won’t get played. West implied that tracks that don’t adhere to the commercialization of black culture won’t get played by the mainstream media. But “Jesus Walks” spoke of different issues that plague the black community and his feelings about it. He spoke of the crimes and drugs that run rampant in his community and offered a message of salvation to his audience.

With West’s explosion into a mainstream hip-hop artist, West had clearly forgotten his roots, and hip-hop’s roots.

Hip-hop records today talk about drugs, guns, violence, alcohol and a glorified view of gang life. Why are these artists promoting and glorifying the various problems of the black community? Because unfortunately, that is what the mainstream media wants. Songs that glorify a life that is basically unachievable sells as the youth listen to their words one day hoping to achieve what is impossible to reach. The formula works, as evidenced by the Billboard charts and top songs of iTunes.

And that is what big companies want from their artists. Empty, commercialized music. This commercialization of hip-hop is killing hip-hop and damaging the image of black communities.

I’m damn sure that not every black person does drugs or is involved with gangs. But that’s the image that mainstream hip-hop portrays of black communities.

If you want good hip-hop music that speaks to the soul, you have to look underground. The underground hip-hop scene is nourishing hip-hop, making sure that a rich culture doesn’t die out to commercialization.

Artists such as Blu & Exile, Bambu and Blue Scholars are still rapping about issues that matter to us. Of course they aren’t well known and their music never hits the top 100 on the Billboard charts. But their music is keeping hip-hop on life support.

These artists follow what hip-hop was: metaphorical verses that make sense and take a political stance with original beats. I’m glad these artists have not sold out to mainstream culture.

Folks, hip-hop is in a critical state, living underground with life support. We need to make a change. Stop buying music that promotes violence and commercialized communities of color. Hip-hop is not about “hoes” and drugs, it is about those who need a voice. Hip-hop is the voice of those disenfranchised. Hip-hop educates those who listen, not blind them with visions of an impossible dream.

This is my plea to save hip-hop.