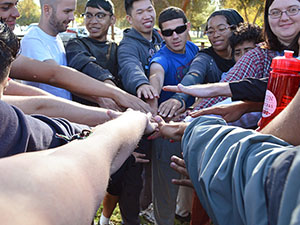 As a diverse group of CSUN students made an abrupt stop beside Lake Webb, the rush of wind caused ripples in the water to take shape.

It is tradition for CSUN’s Lesbian, Gay, Bisexual, Transgender, Queer Alliance (LGBTQA) to host a retreat every semester.

“One of the purposes of this retreat is to build community. We need a strong sense of community to help us see who could be potential leaders for LGBTQA next year,” Andrew Riddick, 20, a mechanical engineering major and treasurer for CSUN’s LGBTQA club said.

As leaders, Riddick as well as other board members hoped to encourage and help shape the confidence of those in their community, especially those open to running for a board position next academic school year.

“Everyone here is opening up about their lives and the struggles that they face. It is bringing us all together,” Riddick said.

Those who attended felt ripples of positivity from the board and other members.

“This is a way for me to get away from real life and connect with people I could not connect with at the [CSUN LGBTQA club] meetings,” said Stefania Salarpi, 21, a civil engineering major.

During the retreat the attendees formed an empowerment circle for group discussions. Almost every attendee spoke and touched on different topics. The recurring themes emphasized were the importance of self-worth, the prevention of putting oneself in bad situations and recognizing the similarities and differences of each person and all the intersectionalities they identify with.

“It’s very beautiful and relaxing. Being here gives me a chance to take a deep breath and come into a world where I feel most comfortable,” said Marta Aguilar, 19, a screenwriting major.

Aguilar said that she is glad that CSUN’s LGBTQA club has brought everyone together. She believes that the location was a good choice because it has enabled everyone to be in touch with themselves rather than in a city where it can sometimes be too chaotic.

One of the teamwork and leadership building exercises played was ‘The Human Chain,’ where everyone huddled, locked both hands with two random people and without letting go untangled their group through communication.

On the last night of retreat, students wrote down on a piece of paper a worry or something that was affecting them negatively and each person threw that piece of paper into the fire.

“It’s a way of psychologically releasing stress and watching [the piece of paper] burn is like watching [what was written on it] disappear,” Salarpi said.

Attendees found that the 10 dollar fee was a small price to pay for the retreat experience. The CSUN LGBTQA Board used the money collected from each member to help pay for food and refreshments.

Associated Students allocated $300 to the event to help pay for the campsite fees, CSUN Outdoor Adventures tent rentals and gas.