Geek culture is a safe space for diversity 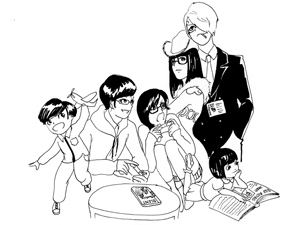 If you had called me those names 15 years ago, I probably would have been a little offended, but not so anymore. Nowadays, mainstream culture has welcomed and even celebrated “the geek.” Terms like “geek squad” and “geek chic” are commonplace.

One only needs to look at the current slate of TV shows and movies for further proof – a show about comic-loving physicists, “The Big Bang Theory,” just entered its seventh season and five of the top 20 highest grossing movies of all time are based on, you guessed it, comic books.

Of course, my fascination with all things geek is nothing new. As a child, I was enthralled by dinosaurs. I would read books detailing their lives, go on makeshift fossil digs in the backyard and even read articles published by paleontologists. I was labeled a nerd by some of my classmates because of my passion for dinosaurs.

But that’s what geeks are: passionate. Geeks have a passion for life and want to express that passion, whether it’s through cosplay (dressing up as a character from a video game or film), fan fiction, fan art or collecting.

We geeks are a passionate people. I had the joy of going to Stan Lee’s Comikaze Expo last month. It was a sort of the *L.A. version of San Diego’s massive Comic-Con International Convention. There, I met similar geeks who shared my passion for “Star Wars,” “Doctor Who,” video games and comics. Many roamed the convention center in amazing and unique costumes. If you go to any convention, you will see that dressing up in a costume is not just for Halloween anymore. Cosplaying is becoming a million dollar industry thanks to shows like “Heroes of Cosplay” and people like Yaya Han and Chloe Dykstra. Even couples and whole families cosplay together.

It was great to see parents passing down the same passion for Ninja Turtles or Ghostbusters to their children. Fan fiction is another aspect of geek culture that is gaining prominence. Fan fiction is when someone takes established characters from literature, film, TV or cartoons and writes new stories with those characters that wouldn’t exist elsewhere. Most fan fiction has to do with two main characters hooking up, like Harry and Hermione or crossovers that would never happen. Though, I’m still holding out for an epic Marvel/Star Wars crossover.

In a way, Hollywood is starting to take notice of fanfics as well. For example, “Fifty Shades of Grey” started out as a “Twilight” fanfic. According to an article in Publishers Weekly, the final product bore little resemblance to “Twilight” so no legal action was sought. Fan art is basically the visual counterpart to fan fiction, whether they’re fan-made posters for existing movies or characters dropped into other universes, fan art will be making a difference too. Long-running internet art website DeviantArt even has a section just for artists to post and view fan art.

As I said, geeks once operated on the fringes of society. A comic book shop closing was nothing new. Playing Dungeons & Dragons or Magic: The Gathering in your mom’s basement was considered anti-social. And trying to convince someone that video games weren’t just for kids or teens was difficult. But it’s this kind of subculture attitude that allowed geeks to become accepting of everybody. We know what it’s like to be excluded, so we want to be as inclusive as possible. Comic books had black, Latino, even gay characters and storylines before they made appearance on mainstream media.

Two years after the Civil Rights Act of 1964, Marvel Comics introduced the first mainstream African character, Black Panther. Though he was a Marvel character, his storylines didn’t always have him battling supernatural forces, one story arc had him fighting racism in “Panther vs. the Klan.”

In 2002, a year before Massachusetts became the first state to allow same-sex couples to get married, two superheroes named Apollo and the Midnighter married on the pages of DC comics. The supernatural character John Constantine has been shown having past girlfriends and boyfriends. There were even two issues of his eponymous series, “Hellblazer” where he dealt with gay bashers. The sexuality of Wonder Woman, who became a feminist icon during the 1960s, is ambiguous at best, as is the relationship between Batman and Robin. But depending on the writer, homosexuality is implied.

Even wholesome Archie Comics has an openly gay character. Earlier this year, a few residents of Riverdale were shocked when Kevin Keller kissed his boyfriend in his own comic series.

Recently, more Latino characters have been gaining more inroads. The Blue Beetle (Jaime Reyes) and the new Ultimate Spider-Man (Miles Morales) are both strong Latino superheroes with their own series in the DC and Marvel universes, respectively.

Even though geek culture is mainstream, there are still portions that lie outside of the mainstream. It is this passion and acceptance that defines us as geeks, nerds, fanboys, fangirls, Trekkies, Whovians, bookworms, film freaks and every other conceivable name society throws at us. If you want to look at the future of America, look to a geek.