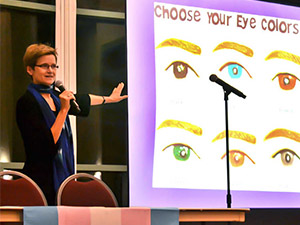 At the Trans Awareness Week event “Rethinking Trans,” Dr. Rachel Levin emphasized the biases in past transgender scientific research in an effort to help students depend less on science in terms of claiming identity.

Levin, a Pomona College associate professor, began her research regarding transgender identity when a student began asking her questions concerning his thesis on transgender health issues.

Levin’s presentation highlighted the failings of past scientific research on transgender individuals, explaining that past research lacks a regard for factors affecting the study such as race.

“I found the studies so incomplete and based on assumptions that didn’t seem to be warranted,” said Levin.

Some previous transgender research exclusively focused on subjects from gender identity clinics, while most of Levin’s research subjects are from transgender organizations and communities.

Levin recalled one of her research subjects, who identified as a woman, expressing her hopes that Levin would find scientific evidence to reinforce her transgender identity. Levin was struck by the subject’s need for legitimacy.

“We are the experts of who we are. If they find a transgender gene and you don’t have it (but) you identify as trans, are you any less trans because you don’t have that gene?” said Levin.

Levin said she understands the sense of urgency to be legitimized through science, but she doesn’t believe that will happen.

“It is interesting how fixated someone is on trying to find a cause when it is clear that it’s more complicated than that,” said Leonel Sanchez, Pride Center peer mentor.

Some of the attendees at the event said Levin’s research is revolutionary.

“(The most exciting part of my research) is having someone come up to me and thank me. Being accepted and brought into the community has been life changing,” said Levin.