Professor educates students about the nonviolent history of Islam 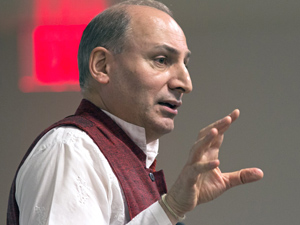 A professor of Islamic studies educated students regarding the history of Muslims and the religion of Islam in an effort to combat the negative stereotypes that are often portrayed in the media.

“I’m trying to show that after 9/11, we have a tendency, especially in North America, to think of Islam and Muslims only in terms of orthodoxy and fundamentalism,” said Ramin Jahanbegloo at the “Nonviolence, Islam and the Paradigm of Cordoba” presentation Tuesday afternoon.

Nayereh Tohidi, founding director of the Middle Eastern and Islamic Studies Program at CSUN, as she introduced Jahanbegloo as a multi-disciplined scholar to attendees.

“I thought that…despite having (seen) all these images and stereotypes about radical, militant, violent Islam, (students should learn that)  in the history of Islam there has been a tradition of nonviolence and tolerance which needs to be enforced and needs to be educated to others, including Muslims,” said Tohidi.

Jahanbegloo, who teaches at York University in Canada, presented in the Jack and Florence Ferman Presentation Room in the Oviatt Library.

Jahanbegloo explained that his work has covered subjects such as Mahatma Gandhi and Martin Luther King and believes that we are in a “non-violence moment in Islamic history.”

“It’s very important to know about this legacy of Islamic humanism which can contribute to the formation and incubation of nonviolence thinking,” said Jahanbegloo.

He also stressed the importance of leaders learning from other cultures in order to become great leaders to great countries.

“I always tell my students that we have the 3 L’s: Listening, Learning, Leading. Unfortunately, in the 21st century we have the element of leading without listening and learning,” Jahanbegloo said. “That’s why we have so many bad leaders around the world, because they don’t listen and they don’t learn. Most of them are either fanatics or stupid, very stupid.”

“I don’t know much about the history of Islam, I guess I just knew all the stereotypes that come with that culture but now I had the chance to get more background on the subject. I think it’s important for everyone to know this information,” said Olson.