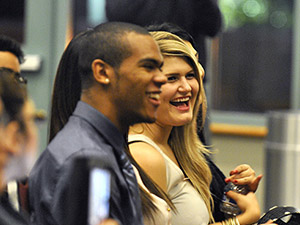 CSUN’s Public Relations Student Society of America (PRSSA) has been named the most successful student chapter in Los Angeles. As such, the CSUN chapter celebrated and held its first induction ceremony to honor outstanding members and to welcome new members to the chapter Tuesday evening.

CSUN PRSSA is one of 300 chapters throughout the United States. The organization is aimed towards students who are interested in a future in communications and public relations.

Lori Baker-Schena, associate professor of journalism, made her first appearance on campus since last spring as the keynote speaker at the induction. Baker-Schena recently recovered from cancer and will be back to teach during the spring semester. Baker-Schena also serves as an advisor to CSUN’s PRSSA.

Nearly 40 new and old members of PRSSA attended the ceremony and socialized at an assortment of tables with provided refreshments. Students came “dressed to impress” in nice attire.

Brianna McDaniel, senior public relations and religious studies major, has been a member of PRSSA for a year.

“I joined because Dr. Lori Baker-Schena told me that this is a very great organization to kind of get your feet wet in the PR field and they offer a lot of benefits like internships and networking. I also like the people,” said McDaniel.

Ruben Ochoa, the previous director of marketing for PRSSA, offered members some words of wisdom from all his experience. Ochoa graduated this past May having received the Mike Curb College of Arts, Media and Communication Dean’s Recognition Award, and he now works for Burson-Marsteller, a public relations company.

“If you guys haven’t made connections and found a mentor, do it while you’re a student…Go out there and get the experience. Make the most out of it…It’s really important that you plan ahead,” Ochoa said.

Before the certificates were awarded to new members and member recognition awards were distributed, Baker-Schena was invited up to speak. It was her first time speaking in front of a large group of people since this past May. Her topic for the night was choosing success.

“I did have a choice on how to approach cancer…I was able to choose to approach it in a very joyful manner,” Baker-Schena said.

Baker-Schena spent her time discussing what she believed are the keys to success as well as success stories from her former students. She congratulated everybody in the room for attending the event because they are, she said, one step closer to success.

“The only people who are in your way of success are you,” Backer-Schena said.