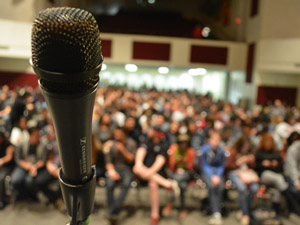 “We wanted to bring the students a stress reliever since finals are coming up,” said Planas.

The Northridge Center stage was transformed to mirror a traditional stand-up comedy setup including a stool, sweat towel and bottled water.

Draped in a lavish fur cape and ‘Costco Kirkland’ diamond earrings, Leggero joked about her aversion to birthing children, the current e-cigarette craze and why there should not be a Playboy talk radio station.

“I really don’t want to physically have a child. I mean, I’ve never been pregnant… for long,” Leggero joked.

Leggero is best known for her role on the short-lived NBC series “Are You There, Chelsea” and various Comedy Central specials.

Wolf, known for his recurring appearances on NBC’s “My Name is Earl” and Fox’s “Raising Hope,” was the second comedian of the night and shared a story about an unfortunate sneeze induced deification incident he had while on the first date with his future wife.

Paola Alvarado, 18, freshman undeclared major, said she really enjoyed all of the comedians and plans to attend again.

“I heard about the show through my University 100 class and came as an activity for class,” Alvarado said.

Alvarado said she was really anxious to see Jo Koy after having watched his routines on YouTube at the start of his career.

Koy, best known for his appearances on BET’s Comic View and the Comedy Central Special Jo Koy: Don’t Make Him Angry,  joked about uncomfortable adolescent situations he experienced with his son and compared and contrasted their childhoods.

“I buy my son everything he wants,” said Koy. “When I was a kid, asking my mom for a rubix cube so I could match up the orange sides meant no orange juice.”

Koy, being of a multi-ethnic racial background, exaggerated the stereotypes of different ethnic groups personalities and mannerisms.

He impersonated the voice of his mother and portrayed her as condescending woman with a thick Filipino accent.

The audience laughed as Koy told stories of his 10-year-old son and the various shenanigans of parenting.

Koy also shared some of his signature material including his “Pull Out” bit.

“Just be a couple without kids. I used to have long, beautiful hair,” said Koy, suggesting that his son was the cause of his hair loss. Koy often joked about his lack of hair in his material.

Domorina Danipour, 22, political science senior, said it was her first time attending the comedy show and she would come back next year for sure.

“It’s worth more than paying $30 at The Laugh Factory,” said Danipour.

Each comedian included the American Sign Language interpreters in their sets by saying random, sometimes risque words in order to learn the signs.

After the show, Associated Students, the host of the event, set up an impromptu meet and greet where audience members were able to takes pictures with featured comedians and get autographs.