The 50th anniversary of ‘Doctor Who’ is nigh 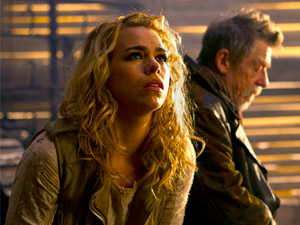 Everywhere Whovians are gathering their sonic screwdrivers in anticipation of the long awaited 50th anniversary of BBC’s “Doctor Who,” which airs in two days.

The special, titled “The Day of the Doctor,” will be one of the last two episodes that will feature Matt Smith as the Eleventh Doctor. Smith announced his retirement from the show in June, but will appear in the anniversary special alongside David Tennant, who is reprising his role as the Tenth Doctor. Smith, who has steered the TARDIS since 2009, will finish off in the Christmas special, which will introduce Peter Capaldi as the new Doctor for the upcoming Eighth series.

When we last left the Doctor in series seven, “The Name of The Doctor,” the entire fandom was left confused and crying after an emotional episode.The veil over Clara Oswald’s (Jenna Coleman) identity is uncovered as the “Impossible Girl,” as she explains that she was born to save the Doctor, and has done so throughout his many regenerations. The episode ends with the Doctor breaking the cardinal rule of never entering your own timestream, in order to rescue Clara.

In the timestream, Clara sees an incarnation of him that she and the audience have never seen before. The Doctor reluctantly admits that the unknown figure is in fact a part of his past that he has tried to forget. His secret is the mysterious War Doctor (John Hurt) who was not deemed worthy of the “Doctor” title.

The War Doctor is explained in a minisode that was released on Nov. 14 by Steven Moffat, the show’s long-running head writer. In the minisode, the War Doctor came to be through a forced regeneration by the Eighth Doctor played by Paul McGann, who was only seen a few times on television and mainly heard through radio shows.

Minutes after the final episode of series seven, speculation on the anniversary special cast erupted. Rumors spread that the show would use every single doctor, and even bringing back one of the fan’s favorite companions, Donna Noble. BBC remained silent like a Weeping Angel through it all, only releasing statements every so often to let fans know that John Barrowman (Captain Jack) and Christopher Eccleston (the Ninth Doctor) would not return. One of the last updates given would be that none of the old doctors would be participating (with the exception of McGann and now the maybe rumored Tom Baker).

Over the summer, fans at Comic-con in San Diego had the privilege of seeing an exclusive trailer for the anniversary. Fans in America and around the world did not have access to the trailer due to Moffat’s threats of never bringing trailers to Comic-Con ever again if anything leaked online. However, it was promised that the trailer would be released worldwide “soon” after Comic-Con, though it never was.

It would not be until October that fans would get some sort of teaser. The 50 Years trailer came out, providing fans with more nostalgia than information. When the full length trailer came out this month, the fandom proceeded to attack and analyze every single detail of the minute and a half video, producing new hypotheses about the special.

One reigning theory among the interwebs is that Rose (Billie Piper) returns as Bad Wolf, an entity that contains the power of the Time Vortex found within the TARDIS. Fans theorize that “Bad Wolf Rose” is just a projection of the TARDIS that exists to help the War Doctor end the Time War. This theory is fueled by the BBC promotional photos, where Rose appears to only interact with the War Doctor and by Rose stating while in Bad Wolf mode, “The Time War ends” in “Parting of the Ways,” the last episode of series one.

Some also argue that the War Doctor is the Valeyard, a darker version of the Doctor from a later regeneration, a concept which was introduced during Colin Baker’s time as the Fifth Doctor. Even the Tenth and Eleventh Doctors not getting along has been a cause of chatter, after the Tenth Doctor complained that he did not like the Eleventh Doctor’s new console room (oh, how the ‘shipping will ensue).

Fans are left with new questions: What is the “moment” and how does it work? How did the Time War exactly end? How did the ninth regeneration occur and most importantly: why is Tennant sporting a Justin Bieber haircut?

Hopefully Moffat will do a service to the show’s multi-generational fans by not going against the already set rules of time travel and keep the true spirit of “Doctor Who” in mind. Chances are, this will be one of the most epic episodes to watch.

So come along, get your 3D glasses and fezes ready for some wibbly-wobbly, timey-wimey chaos that’s sure to ensue.