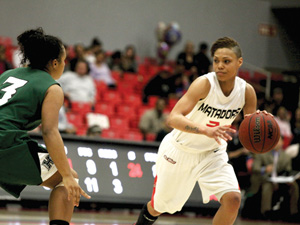 Georgia Southern’s Anna Claire Knight scorched the Matadors for a game high 28 points but had no other support as she was the only player for the Eagles to score in double figures.

The Matadors began the game sluggish, shooting 23.3 percent in the first half. The Eagles battled their own shooting woes connecting on 11-32 shots from the floor for 34.4 percent.

Despite a horrific shooting percentage, the Matadors were able to attack the basket and get to the free throw line. They shot 12-16, 75 percent, while the Eagles only attempted eight free throws in the first half. CSUN went into halftime trailing by three.

The game was a tale of two halves as the Matadors exploded offensively in the second half. CSUN jumped on the Eagles early with a 12-2 run and the lead eventually ballooned to 18 points before Georgia Southern fought back.

CSUN head coach Jason Flowers stated that he and the rest of his coaching staff challenged the team at halftime because he knew his team was not playing up to its potential.

“We challenged the team at halftime. We didn’t feel like we played like we were capable of in the first half,” Flowers said in an interview with gomatadors.com. “We responded much better this weekend than last weekend and that is definitely a step in the right direction.”

Junior guard Cinnamon Lester led CSUN in scoring with 19 points – 10 in the second half – contributing to CSUN’s blistering field goal percentage in the second half. Point guard Ashley Guay was second in scoring with 16, while senior forward Mikayla Thielges dominated the paint grabbing 17 rebounds, two rebounds shy of the school’s all time record for most boards in a single game.

Junior center Camille Mahlknecht just missed out on a double-double for the second straight game. She posted 10 points and nine rebounds in 26 minutes against Georgia Southern, and 12 points, nine boards on Sunday against Clemson.

CSUN had a tough road trip, traveling first to Sacramento State, Montana State and then Clemson before arriving at Georgia Southern.

Though losing the first two games, Flowers was much more pleased with his team’s effort this weekend than the previous one. He said they responded to the competition better and that is a step in the right direction.

The Matadors became more and more comfortable on the road each game. After surrendering 17 three-pointers to Sacramento State, a school record, the defense began lock down.

The 69-53 victory Sunday over the Clemson Tigers marks the first ever win for CSUN over an Atlantic Coast Conference team, and represented the third straight year the Matadors have defeated a BCS opponent. The back-to-back road wins is also a milestone as it is the first time they have accomplished this feat since February 2005.

Lister’s game high 24 points against Clemson marked a new career high for the junior who spent her first two years at Boise State. She shot 50 percent from the floor and added three assists and two rebounds. Her counterpart, Guay,  added 16 points, six rebounds, and five assists as the Matadors caged the Tigers.

After going 2-2 on their road trip to open up the season, the Matadors will return home for six of their next eight games.

Their home opener will be on Sunday versus the BYU Cougars before they tip-off the Radisson Hotel Chatsworth Thanksgiving Basketball Classic at Northridge.