‘Transvisible’ documents love, acceptance within the life of a transgender activist 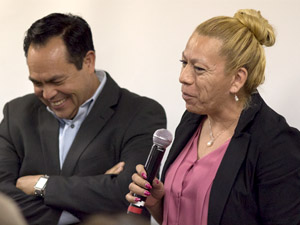 In the presence of Salcedo and the filmmakers themselves, students watched the documentary that delved into the life of Salcedo. The film depicted her struggle growing up as a transgender Latina, and her work today as an activist for the transgender community as a whole which was further discussed during a question and answer session following the screening.

Salcedo was born and raised in Guadalajara, Mexico and her youth consisted of drug addiction and jail sentences before she decided to move to California. Still, the film depicted that even in the U.S. it was hard for her to escape her troubled past that caught up with her.

“The first step is for us to be open and not afraid, we are just like you. We’re human, flesh, and blood,” Salcedo said.

Salcedo has committed countless hours to the cause of LGBTQ rights, whether it be speaking at rallies, or coordinating her Angels of Change fashion show and calendar for transgender youth.

“I realized in my first interview with a transgender woman in Peru that we have more things in common than we do differences and we should emphasize the commonalities and similarities rather than emphasize our differences,” said Dante Alencastre, the film’s director and LGBTQ activist. “We’re all different, but believe me, we have a lot more in common than you can imagine.”

Alencastre decided he was going to make a documentary on Salcedo not only because she was a recognizable figure in the Los Angeles transgender community, but also because she presented herself to him as an open and transparent person with nothing to hide.

“She was totally open, there was no question I couldn’t ask, no letter I couldn’t read, no photograph I couldn’t take and show, there was no stone left unturned,” Alencastre said. “It’s rare as a documentary filmmaker that people turn themselves over to you so I was spoiled.”

Salcedo, according to Alencastre, literally hugs every person she meets, which is a quality that he said was a big factor in wanting to document her and something that he never forgot when he first met her.

“The most overwhelming feeling I had was the love she inspires and gets from people. The whole film for me is a love story about her, her family, her friends, her community and all the children, all the angles she touches. They come from broken homes, abuse, family rejection and the first person they meet is her,” Alencastre said.