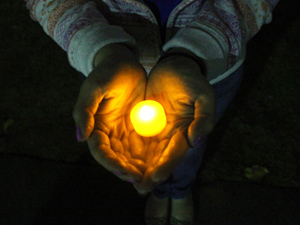 The Beat the Blues and Trans Awareness Week hosted a combined candlelight vigil to commemorate the lives of those lost to suicide and to strengthen and encourage those who have experienced depression. Guest speaker, Finn McMillan spoke about his own depression and struggle to feel comfortable as a transgender man.

McMillan, 23, was born with female sex organs but he has always identified as a man.  In high school and college years, McMillan suffered a number of urinary tract infections because he would not drink water in order to avoid the awkward encounters in the gender specific restrooms. Instead he would wait until he got home.

McMillan states that 41 percent of transgender people have attempted suicide in comparison to the 1.6 percent of the general population. In the past years, McMillan has struggled with over-eating and cutting in order to cope with his internal discomfort and depression.

Coming from a conservative family, he knew that coming out would be very difficult, most notably on his father’s side. To this day, McMillan is still  working toward feeling accepted by all his family members and friends.

“I am filled with battle scars of my internal war,” McMillan said of referring to the many times he thought something wrong with him. The stigma that circled within his small conservative town is that transgender people are “freaks.” It took a lot of courage and education for him to come to terms with who he is.

McMillan’s lasting message to those in attendance was to read more in order to arm themselves “with the illuminating sword of knowledge.” Knowledge is the key to understanding, McMillan said, and from understanding there will be tolerance.

Wendy Ramirez, the host of the Candlelight Vigil, said the Blues project has been around for nearly 30 years. Its purpose is to get students involved interactively.

The candlelight ceremony is meant to remind students “that we are here for each other,” Ramirez said. No one needs to fight depression alone when there is a community of people to talk and relate to that is beneficial for all.

Ramirez was inspired to join by presentations she had seen about the Blues Project three years ago. “It is important to be aware of the warning signs and help people prepare,” Ramirez said.

Ramirez joined the project about three years ago and eventually started giving presentations about the project herself.

“At first I was scared when I was approached by a student who had thoughts of suicide,” Ramirez said. “I let them know about the on campus resources  and that students are eligible for up to eight free sessions of therapy.”

Ramirez believes that knowing you helped a person, potentially saving their life, makes involvement in the program rewarding.

Claudia Chirino, the president of the event, was compelled to join the club after her friend attempted suicide in high school.  Chirino said she did not see it coming because she did not know how to recognize the symptoms of extreme depression.

Freshman year of college she learned about the blues project and is now able to correlate her friend’s symptoms with the attempt.  “A community must look out for each other,” Chirino said.

In addition, Chirino is now able to recognize signs of depression in her own family members and has helped them get the help that they need.

Student and Blues Project team member Melinda Salazar had to be a rock within her own family, after having experienced seven years of depression due to a number of consecutive deaths.

“We kept losing members of the family and I had to stay strong. It does get better,” Salazar said to encourage attendees. “You have to keep hope.”