‘Doctor Who’ needs a new mastermind 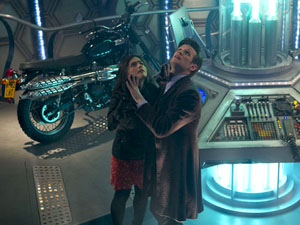 Whovians! Lend me your ears! It’s time for a mutiny.

For years, Steven Moffat has been a brilliant writer for “Doctor Who,” having been the genius behind classic episodes such as “The Girl in the Fireplace,” “The Empty Child,” and the always nightmare-inducing “Blink.”

But Moffat’s dictatorship as head writer must end. The genius has fizzled out. The jokes have gotten old and this 50-year-old show needs some fresh blood as soon as possible.

I know, this kind of talk is heresy, but Moffat has quickly turned this smart, complex and dramatic sci-fi narrative into a shallow showcase of beautiful hipsters running from God awful episode to episode.

First, his decision to hire a young, geek-chic Eleventh Doctor was a clear play at making “Who” mainstream and easily marketable. Now, don’t get me wrong, Matt Smith is a great actor, and has done well with what had been given to him for the past three seasons, but come on. The Doctor is nearly 1,000 years old. He should at least look a bit like it.

But no, Moffat declared, put him in a cute bow-tie and dangle him in front of the pre-teen girls, they’ll swoon! Soon every Hot Topic in America will have shirts with his face on them!

So he sayeth, and so it was.

Besides Smith, Moffat’s choice in companions has been just as shallow as their writing. Amy Pond (Karen Gillan) is simply “The Girl Who Waited” and Clara (Jenna Coleman) is “The Impossible Girl”, all while Rory Pond (Arthur Darvill) is gifted the nickname “The Centurion” despite having managed to die in nearly every episode he’s been featured in.

Don’t give me “girls” whose sole purpose is to fawn over the Doctor and try to kiss him in every episode. Give me women that I can identify with and look up to.

Give me Donna Noble (Catherine Tate) smacking the Doctor over the head and calling him “Alien-boy,” or give me the “Defender of the Earth” Rose Tyler (Billie Piper) who bent space and time to get back to the Doctor. Moffat’s predecessor Russell T. Davies wrote strong women who walked the Earth, saved the Universe and didn’t take shit from anyone.

Sure, Rose and Martha Jones (Freema Agyeman) smooched the Doctor too, but there was depth to those relationships, something there to care about. Moffat’s women simply seem to enjoy pinning the Doctor against the TARDIS for no apparent reason, as does every female being that the Doctor encounters on his travels.

Speaking of shallowness, let’s talk plot. Series five and six were hard enough to get through, but series seven made almost no sense. There were dinosaurs on spaceships, cowboys, evil snowmen and the inevitable return of the Weeping Angels. These once horrifying monsters are just annoying at this point, as Moffat’s wasted any possible scare-factor by making them into a recurring joke.

Every episode was lacking a theme, an arc, anything that could signal that all of these shitty moments might build into some kind of beautiful finale to redeem the whole season, which is what Moffat tried (and somewhat pulled off) with series five and six. But no. The Doctor’s penultimate companions Amy and Rory Ponds’ exit from the show in series seven took less than one episode, which wouldn’t be too bad if their leaving wasn’t so horribly crafted. It was a complete disrespect to the time those characters spent on the air, and a disappointing ending to the half-season.

With the degradation of the show, viewers are left to worry about the show’s crowning glory in the upcoming week: the 50th anniversary.

Moffat already managed to disrespect this 50-year-old cult hit by not inviting back any other previous Doctors to appear in the special episode, besides David Tennant (with the exception of the somewhat-young-and-handsome Eighth Doctor Paul McGann for a six minute minisode). Former Sixth doctor, Colin Baker, criticized the show for not including any veterans for even a minute-long cameo, which would be enough to honor these actors and satisfy nostalgic fans.

Even worse, Moffat’s refusal to release even the smallest teaser trailer for the special until this month is ridiculous. Fans went six months since the end of series seven with no signs of what was to come in the anniversary. The minute-long trailer was released during Comic-Con, where Moffat infamously proclaimed if any fan were to leak footage, he would never share any special content with convention-goers ever again.

Talk about an unnecessary dick move.

Despite the heinous insult to previous actors and fans, the few teasers that have been released this past month in anticipation of the special appear promising. Along with the well-received return of Tennant as the Tenth Doctor and Piper as Rose Tyler, fans can’t help but be excited about the anniversary special.

We can only cross our fingers, and hope that Moffat has written something that’s actually worth waiting for.