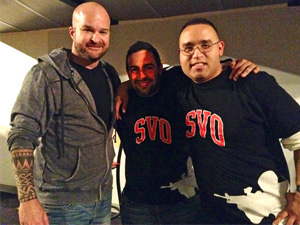 Operation Comedy is a free comedy show for veterans and its mission is to provide the healing power of laughter to those serving the country. All their comedians are veterans of the war, each stemming from a different branch of the military.

SVO president Arturo Garcia was thrilled with excitement and hoped that the event sent a message to those unaware of veteran issues.

“I want to let others know that the SVO is here.  Veterans are underrepresented and I wanted to do something to let them know that they can come out here and have fun and watch a comedy show.”

Along with the help from Associated Students, USU and the VRC, Garcia says that they passed out flyers around campus and used social media sites to spread the word. They also invited other local community colleges to come see the show.

Operation Comedy landed at CSUN when SVO vice-president Tomas Diaz attended one of their comedy shows in Burbank. Two days later they were in contact with each other.

Operation Comedy leader, Jon Stites is the founder of the show and started the group 5 years ago when he noticed a lack of provided entertainment for veterans.

Stites proudly recognizes the SVO’s dedication and commitment to making the show possible despite having to clear some landmines.

“They did everything, we did no promotion,” Stites said. “We’re just here to tell jokes, all the legwork was done by them and this is definitely the most active aggressive student organization on any college campus so far.”

The show started at 8:30 p.m. and as attendees enjoyed a free meal and music, they also cackled and hollered in laughter as the jokes came rolling in.

Comedian Fahim Anwar was the only non-veteran in the show, still he managed to steal the show with his hysterical Lady Gaga impressions and a performance of his original rap song.  Another crowd pleaser was when Anwar recounted his unfortunate ending to a late night text he had received.

“This girl texted me one late night, ‘Come over’ and I texted back, ‘Is there parking?’ ” Anwar said. “I never found out if there was a spot.”

English major Jeffrey Connor accompanied a friend to the show and after a few minutes he was induced with laughing attacks. Connor said he was surprised by the array of talent the show had.

“I thought the event would be okay,” Connor said. “You never know how good the jokes are going to be and it might be a let down all together. But this was amazing and I’m so glad I came. They were hilarious and the pub is a great place to have it in.”

The show ended at around 10 p.m. and before anyone had a chance to leave, the SVO  awarded Stites with a decorated certificate, making him an honorary member of the group.